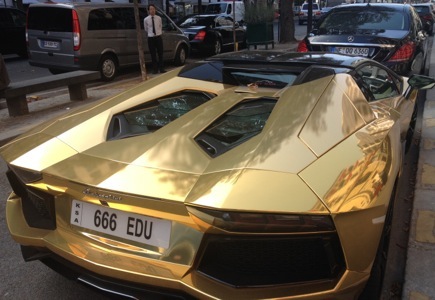 What BLINGOPHILE would have a gold Lamborghini

Walk around Paris and you do see bang-bang-bling-glitz. This is typified, says the gal, by this totally over-the-top Lamborghini, as gold as you make’em. As you can see, it has a Saudi plate. The cultured French, by contrast, probably drive innocuous Peugeots and sometimes scooters (which have been taken considerably upmarket after the exposure of presidential patronage, off-duty and hoping, in vain, to be off-record). But those cultured French know the value of their magnificent luxury hotels as meeting places and watering holes. They spend a lot more on the finer things of life than some other nationalities. 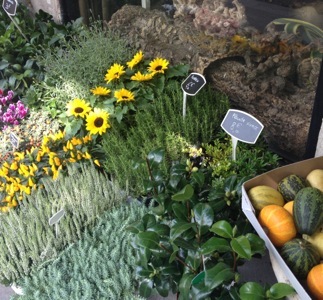 By contrast, a neighbourhood flower and plant store

They spend on flowers. And, refreshingly, shortly after nearly gagging over that ghastly car I passed a little neighourhood flower shop, and I smiled again.   I was on my way to the birthplace of great floral masterpieces in the hotel world, Four Seasons George V. When, coincidentally owned by a Saudi, but one with taste (Prince al-Waleed) it reopened in 1999, then GM was Didier Le Calvez. He managed to borrow the artist who did the flowers at Four Seasons Beverly Hills, Los Angeles, Jeff Leatham. The 245-room hotel immediately became an outstanding success and Mr Leatham became Monsieur and stayed put, constantly re-imagining his trade marks of using groups of one-colour blooms, say set at angles and in wacky containers. 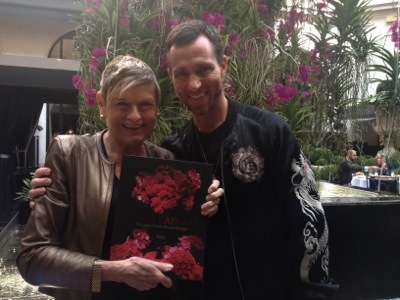 Jeff Leatham holds the first copy of his book

Jeff Leatham, now Artistic Director of the hotel, employs nine people in Paris, and two in his New York office. He organises his flowers – some say over 12,000 blooms a month, all from one Amsterdam supplier. He teaches, he does mega-weddings, say for Chelsea Clinton, Eva Longoria and Tina Turner. He has ranges of cosmetics and home smells, and he writes books. His absolutely gorgeous Vision of Floral Art and Design, his latest, will be published October 13th, 2014, by Rizzoli, and he showed me his advance copy – I wanted one immediately. It is the kind of coffee table book that will actually be used, again and again. 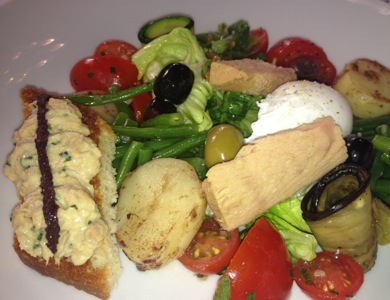 We sat, lunching under one of two chandeliered gazebos that Jeff Leatham has designed, as summer pop-ups, for this luxury hotel. His masterpiece currently is what could be called the hanging gardens of Bangkok. What appear to be hundreds of purple orchids, from Thailand, hang over a black plinth that could have been copied from a mausoleum of a suitable emperor. He talked while I ate, loving ever mouthful of what is deliberately called the chef’s ‘take’ on a salad niçoise.