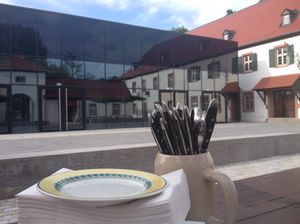 Old, and old reflected in new…

Every mother thinks her new-born baby is the most beautiful in the world (and others have to coo and aaah at its wrinkled face). Well no-one, except perhaps its new owner, can possibly think what is now called Kempinski Hotel Frankfurt Gravenbruch the most beautiful luxury hotel in the world. But beauty is in the eye of the beholder, said an ancient Greek sage. And now that this Neu-Isenburg hotel, which dates back to a 1586-vintage castle, is getting a face-lift, with juxtaposition between, say, the brand-new glass-sided ballroom and the 1970s rust-and-cream main buildings, it is looking, well, fantastic, thanks to Wiesbaden-based architects Rene Vollrath and Ernst Jahn, and a Frankfurt designer, Madeleine Moos. 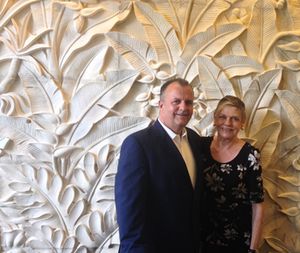 New things are happening the whole time. The energetic GM, Stefan Schwind, bounded up to my room – the furthest of the 256 rooms from the main activity – to pick me up for dinner. We were in the recently-opened addition, Sra Bua by Juan Amador. This very day, a wall had arrived from Bali, and we had to pose in front of it. Sra Bua also has Thai statues and other indoor artifacts but actually we decided to eat outside as it was a divine evening. Divine is a useful word. This evening we had great conversation, helped by the addition of Brice Pean, who is opening up what will be one of Kempinski’s most unusual hotels, a hotel and villas, all by different designers, on the outskirts of Beijing. 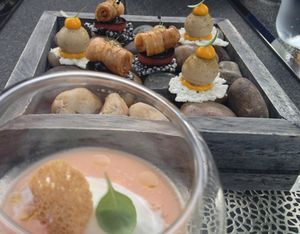 It was divine, too, because of the food. The chef is one of the new breed of younger German culinarians, fit and keen and highly telegenic, one Dennis Maier. His menu is fun, with such headings as Smiles and More, and so on. Some of the dishes that came out included a glass dish with peach gazpacho and yoghurt icecream and a mini prawn, and a tiny dish of the babiest asparagus I have ever seen, with almond and cherry. A signature is goose foie gras with green peach and mirin. I asked for a local red but got a very pleasant 2011 Op Eximium Cuvée No 24 Trocken, Blaufränkisch St Laurent, Zweigelt Gesellmann, Burgenland (the Austrians are just as confusing with their wine names as the Germans, why do they not follow the Americans and simply stick on a label saying, perhaps, Opus Too 2011?). 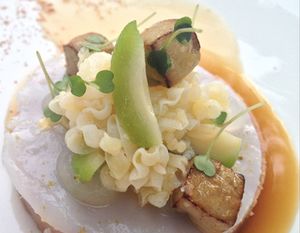 There was a highly imaginative dish presented on a wooden tray filled with river stones. Carefully balanced on top of said stones were one-bite portions of green curry balls with mango and rice chips, and other one-bites of belly of pork wrapped around watermelon. Now Kempinski, as a group, is taking food VERY SERIOUSLY. Led by the company boss, Reto Wittwer, it is almost going as far towards ‘restaurants with rooms’ as it could without overstepping the mark. Here, the main inside-out Forsthaus has long been complemented, summer only, by a really authentic beer cellar, Schoppenhof. I went to visit it, was shown the indoor cellar and its display of beers and eaux de vies by strapping young men all ready to serve, Oktoberfest style. 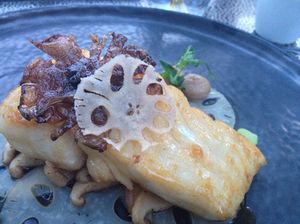 But this hotel, in its new guise, wanted more, and thus the addition of Sra Bua, sibling to the highly popular one in the Siam Kempinski, Bangkok. We had to try its signature, Perfume de Siam, tuna with shiitake, green curry and beurre blanc, and then I went on to wild turbot with lotus root, more shiitake, and pea juice poured over. This was a very green sauce, perfect for the surroundings – the hotel has 80 acres of well-tended parkland, with mature and newly-planted trees, and I borrowed a (great condition) bike to go off on endless tracks in the endless thousands of acres of native forest around. 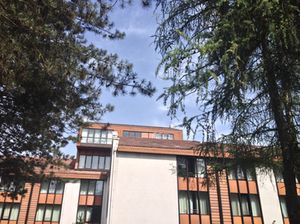 No wonder a Top Person choose to live in the rooftop suite, here

I could not believe this luxury hotel, where green in all its connotations is the operative description, is only 15 minutes from downtown Frankfurt, and 20 minutes from the airport. In the morning, as I sat outside at Forsthaus trying various pumpernickels – this is Hesse, the state of banking and breads – I looked up at other wings of the hotel, and saw the rooftop suite where Reto Wittwer had actually lived for a few years. Now if the boss likes his products, that certainly says a thing or two.