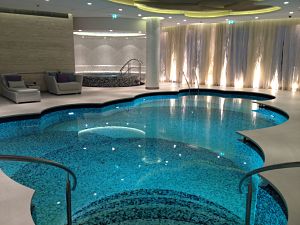 What makes a luxury hotel’s swimming pool stand out? In Hôtel de Paris – Saint Tropez, opening this summer, the glass-bottomed pool is suspended 50 feet above the lobby so that sun shines down into that area (there has long been an outdoor pool in Melbourne which has one glass end cantilevered over the street below). At Chewton Glen Hampshire, the indoor pool, with classic columns around, looks into gorgeous gardens. The Merrion, Dublin; The Langham, Sydney, and Hotel le Bristol, Paris, have trompe l’oeil at the end of their indoor pools. Mandarin Oriental Paris has moving butterflies along the side walls.  Ritz-Carlton Hong Kong has videos on the roof. The indoor pool at the brand-new Waldorf Astoria Berlin, which the gal tried a couple of days ago, is just a beautiful shape. 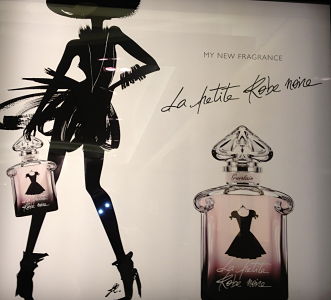 Chic at the Guerlain Spa

The entire Guerlain Spa at the Waldorf Astoria Berlin, of which the  pool is a part, is beautifully chic.  You have a feeling this is a haven for Beautiful People, and you feel like that too. The team wear chic champagne-coloured pyjama suits.  The vitrines around are full of lovely perfumes and products and therapies to make you feel more, well, Audrey Hepburn and Breakfast At Tiffany’s.  What is today’s version of that?  Perhaps Katie Holmes looking at Bobbi Brown displays (she is now ambassador for that make-up brand), or Anne Hathaway dining at Megu Midtown, one of her favourite eating places. 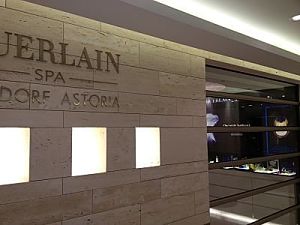 Yes, it is, well, striking

The spa, like the 231-room hotel, was designed by a Parisian company, Inter Arts Etudes.  There is certainly something French about it all.  The spa has plain stone walls, or walls that are entire covered with floor-length champagne-coloured curtains. There are floor-length curtains, too (stone and softest teal-coloured) in the bedrooms, which have dark wood floors, bursts of colour through, say, a single persimmon-coloured standing lamp.  There is a certain amount of chic minimalism about it all.  This contrasts beautifully with the hubbub of central Berlin outside. You look down at the Memorial Church, and the zoo, and the prominent Zoo rail station. You see taxis rushing around – Berlin cab drivers think they are, or were, Formula One specialists. 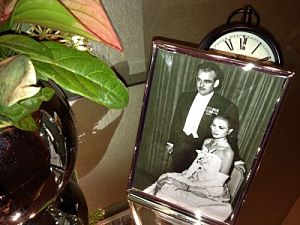 HSH Prince Rainier and his Princess

Touches of elegance are dotted here and there.   A collection of  silver-framed photographs in the spa show old black and white photographs of the Astor family, who gave their name to the Waldorf Astoria brand.  There is an image of a big gathering, the central figure being the UK’s much-loved Queen Mother, in full ceremonial regalia, including a diamond tiara.  Another photo, shown here, is of HSH Prince Rainier and his wife, Grace Kelly.As with all the photos on display, there is an attendant nosegay, and an antique clock, not only working but showing exact time. 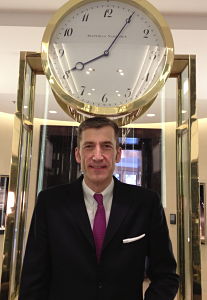 There are lots of clocks throughout the entire hotel.  Pride of place, in the mirrored lobby, goes to a six-foot glass-walled grandfather clock custom-made by Germany’s master, or celebrity, clock-maker Matthias Naeschke. I walk around it trying to work out how such an elaborate piece of engineering appears to have so few working bits on its rear, and merely three weights hanging down to make it keep exact time.  This is certainly the place for all-time photographic recordings, so I ask the hotel’s GM, Frieder Niemann, to pose.  He has to bend down slightly as he is surely more than the height of the clock. 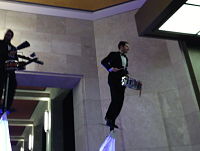 Stilt-high drummers at the hotel entrance

But there were other tall men there the night I was there.  The hotel  was throwing a party for its favourite attendees at the annual ITB travel zoo (sorry, travel fair).  These lucky people were greeted, on arrival at Berlin’s newest luxury hotel, by a quartet of Swedish musical entertainers, each drumming away while standing on top of a 12-foot pole that they could make, alarmingly, sway back and forth almost down to the ground.  The passers-by outside were enthralled… they, sadly, did not get to see the Swedes later performing, at floor level, in the hotel’s ballroom.  Did anyone say that hotel life is boring? Not here, in beautiful Berlin.