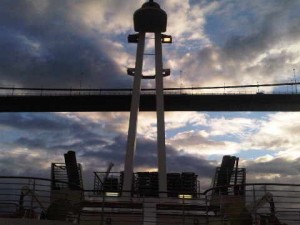 Silver Explorer sails under a bridge into Bergen

Silver Explorer sailed into Bergen shortly after dawn.  Like Alesund, Bergen suffered from fire, or rather fires, plural.  There were intentional fires in 1198, 1248 and at least three times in the 15th century and onward, but the biggest were in the 18th century (one in 1756 burned 1,500 homes).

There were more significant fires right up to 1955, when parts of Bryggen burned.  Despite all this, Bergen was Norway’s largest city, until Oslo overtook it in the 1830s.  Today it is the 2nd largest, with a population of just over quarter of a million. The gal was there, again. 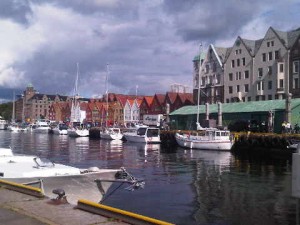 Gosh, Bergen is a cosmopolitan place.  Silver Explorer was being replenished.  Supply trucks for dry-goods had number plates from Belgium, the Netherlands and Germany.

Waiting nearby to get on the daily Hurtigruten postboat and other ships moored in Bergen harbour were vehicles with number-plates of every European country, in the EU and outside (we hear from a former banker that EU banknotes beginning with an X, by the way, are Greek, so perhaps they should be avoided…).

We walk along to look at Bergen’s famous Bryggen terrace, with its side-by-side row of topsy-turvy wood buildings dating back to the 14th century, when they were constructed for Hanseatic merchants. 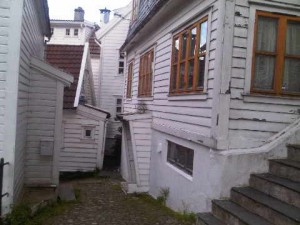 For exercise, we head north up through winding streets, near diagonal, going up past the base of the Fløibanen rail link to the top of Fløyen mountain, 1,050 feet up.

We got up to about 300 feet, to amazing houses that seem to be set at any angle. Some of them can only be approached by steps – no roads, for vehicular access, so how do the postmen and garbage collectors manage?  We know they do as today is clearly garbage day. 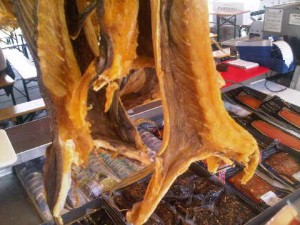 Back down at ground level we head for the Fisketorget market, at the east end of the harbour. Wow, this must be the world’s best fish market outside of Tsukiji in Tokyo.

Go to Tsukiji, for sights of whole tuna and amazingly fresh sashimi and sushi.  Come here, to Bergen, for displays of whole smoked salmon sides, over four feet long, and crabs’ legs that are well over two feet.  Stall after stall has food to offer, to take home to cook or to have cooked, here. 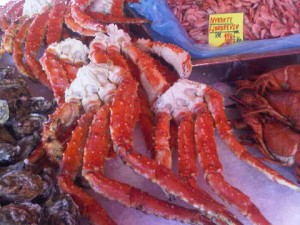 .. through to two-foot-long crab legs

Just as in Japan, they show what whole dishes look like, but whereas there they are plaster facsimiles, here they are real food.

Fish and chips Norwegian style?  Or how about wok-cooked vegetables with a scallop skewer?  If you want to buy dried cod, bacalhau, to take home, this is your place.

Another stall has dozens of different types of North Sea caviars. The servers, all in day-glo orange waders, shapeless things that, hung from your shoulder, come up to higher than your waist, are typically young, gregarious and multilingual.  One speaks Russian, seemingly without any accent. 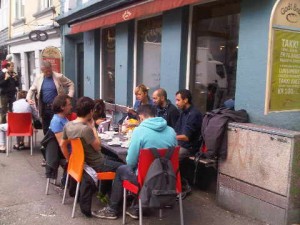 You could be forgiven for thinking Norwegians eat all day long.  A typical snack is a sugar skillingsbole cake, a Catherine-wheel shape.

Have with coffee (five per cent of the world’s coffee is drunk here in Norway). At any time of day cafés are full, and on a fine day people sit outside on the pavement.

One such café is just a few yards from Korskirken church. A priest stands outside, having his photograph taken.  His outfit, of green scarf over full length white cassock, is completed by black and white trainers. 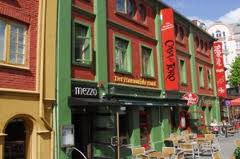 We head for Det Hanseatiske Hotel, arguably Norway’s top luxury hotel.  Six years old, in a merchants’ building that dates back to mediaeval times, it is one minute from the Hanseatic Museum, two minutes from the harbour and the fishmarket.

The Sande family who own it have recently extended it, by popular demand, to 36 rooms, and the ones I saw were both charming.Un-varnished wood beams form some walls and all ceilings, while the floors are shiny board. 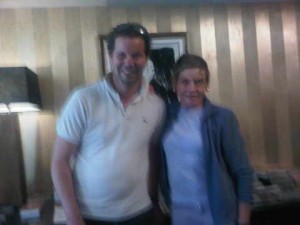 The entire hotel, including its charming bar and characterful restaurant, is WiFi, which is free.  From what I could see the service was perfect, which is difficult in an area, namely Scandinavia, where the word ‘service’ does not really exist – except when it comes to selling seafood or coffee. 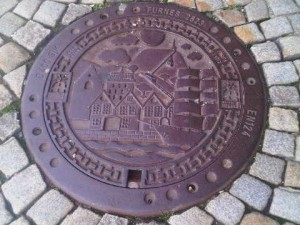 Outside in this amazingly clean, and interesting city, even the manhole covers are ‘themed’. Norwegians are tough.

There is an article by Steve Bloomfield in Issue 56 of Monocle (September 2012 edition).  Every year over 5,000 apply to the Norwegian Army’s officer training school, of whom half are invited for interview.

Eventually 673 will be offered places but they are chosen after a three-week practical session in the forests of Evjemoen, an hour north of Kristiansand.  This weeding-out includes wading through rivers while carrying heavy back-packs, and sleep deprivation and role-playing.