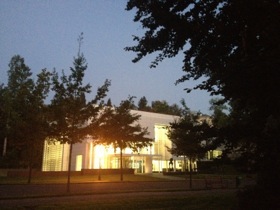 At the luxury hotel that is Brenners Park-Hotel & Spa, Baden-Baden, the headquarters of the Oetker Collection, there are other jewels in the immediate vicinity. The gal woke up, before dawn, and headed around the well-lit neighbouring Lichtentaler Park. The inner-lit Burda Museum, which opened in 2004, is designed by Richard Meier, who also did Wolfgang Puck’s CUT restaurant in Four Seasons Beverly Wilshire – here, there is a massive rusted scroll, by Ben Jakober (similar to the standing knitting needles at Rosewood Mayakoba). Inside, apparently the Burda Museum has the biggest-ever collection of Gerhard Richters but, obviously, at that hour it was impossible to view them. 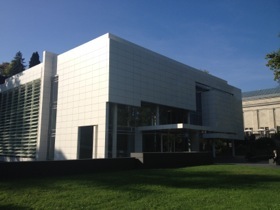 And later, sadly, I was already on my way. No time to get inside the Burda Museum, time only to view, from outside, Germany’s largest opera house (2,500 seats, a conversion of the former Baden-Baden railway station), or the Kurhaus, which Marlene Dietrich said was the most beautiful casino in the world, and where such bodies as NATO, in 2009, and the Olympic Congress, in 1981, have met – presumably in its events facilities rather than at the tables. I took one of the hotel’s first-class mountain bikes and before heading up steep hills I explored the town, amazed at the side-by-side terraces of designer shops, and little cafés, and not a single speck of litter, anywhere. 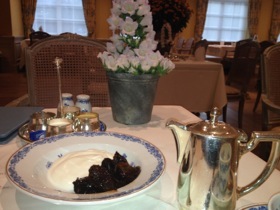 My table in the lovely breakfast room

Brenners has its own beehives, and a whole honeycomb graced the dedicated breakfast room’s separate buffet area. There was a whole wall of different breads, and the help-yourself butters included those foil-wrapped sticks that are oh-so-German, and so good. Unlike some hotels, where the breakfast team is half-awake and or somehow inferior, here the servers are highly polished and sensitive: breakfast Manager Kanica Becker even has her photo, alongside those of other top people, in guests’ welcome booklet (another unusual feature of this 100-room hotel is that the weekly Friday cocktail includes a manager-led tour of the facilities). 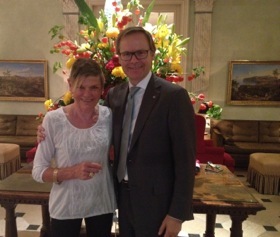 The hotel’s MD is Frank Marrenbach, who is also CEO of the Oetker Collection, overseeing its hotels from St Barth’s east to the Seychelles.   We dined in the Michelin-starred The Park, looking out at – Lichtentaler Park. It was crispest starched linens (I had seen the iron used to erase the slightest crease), and silver napkin rings, and sommelier Karl-Heinz Schopf, who has been here nearly 35 years – he chose a Martin Wassmer 2010 CALMO, which stands for Castellberg Altenberg Letten Malteserfarten Alberg. I started off with Austrian chef Paul Stradner’s Autumn mushrooms with emulsion of parsley, cream of hazelnut and shallot crunch and thought about Wellness Director Hans-Peter Veit, not an ounce of fat on him, who claims that stay here, follow a regime and you can lose two to 2.5 kilos of fat a week. 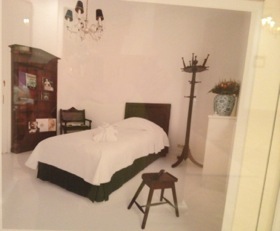 One guest’s ‘decoration’ of art-room 127

Frank Marrenbach makes this historic luxury hotel the opposite of stuffy. Early this year he worked with the Staatliche Kunsthalle Baden-Baden on a project called ‘Room Service: Hotels in the Arts and Artists in Hotels’. Part of this was led by the hotel’s artist-in-residence, Christian Jankowski. The hotel’s room 127 was painted white, and left empty. Overnight guests, of whom Marrenbach was one, chose, beforehand, room furnishings from a ‘dressing-up box’ selected by the artist – one guest, thus designing his own ‘art room’, went all-traditional, another eschewed seating in favour of a crate of beer and so on. The following morning, the guest of the previous night had to share whatever he/she had decided during the night. Original? You bet.