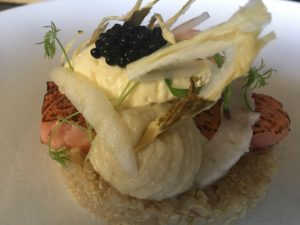 Brian Benson, Hotel Manager of the luxury Gainsborough Bath Spa hotel, in the beautiful English city of that name, is a most unusual hotelier (the gal just loves these one-off guys, and girls). Born in Glasgow, Scotland, he dismissed early plans for architecture or law and studied sociology, and to earn some money he worked in a cocktail bar. He discovered if he did a good job he earned at least 25% more in tips and that sowed the seed of customer service. Next came tour-guiding in the Grand Canyon, and while holidaying in California he met his now-wife, and somehow got into hotels. And, it seems, they are both in love, not only with each other but with Bath – Mrs B’s day-job is teaching English students, and in between she is a docent at Bath Abbey, all done with an American accent. 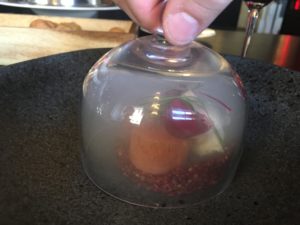 .. and a smoke-filled cloche…

And Brian Benson is passionately in love, too, with this elegant hotel. No other property in UK has such unique thermal waters, and now that guests of the 99-room hotel – owned, like the adjacent Bath Thermae facility, by the massive YTL conglomerate – can be joined by a few day visitors, The Gainsborough’s spa is doing really well. Day visitors come from as far as London, a couple of hours’ train ride away (conveniently, the station is only seven minutes’ walk from the hotel). The day ticket includes a massage, as much soaking in the different-temperature thermal baths as you want, and your choice of afternoon tea or lunch. I, of course, would definitely choose lunch, partly because of the food. 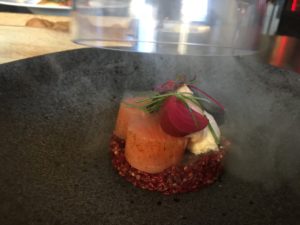 Dan Moon at The Gainsborough is a delight. It seats 100, in several areas partly divided off, and tables are simply set, with no linen cloths. Bread presentation is unusual, and noteworthy. Tiny two-bite loaves come in a wood top-less box, three loaves per person – my favourite is the one with seeds on top, and I also adore the hotel-infused butters. There is a multi-choice two-course lunch menu, for £26.50, and I decided to go salmon-and-quinoa. I started with smoked cured salmon on fennel quinoa, which came with caviar, and crab bisque to be poured around it, as much, or as little, as you like. I went on to what was described as a smoked ballotine, which came in a smoke-filled glass cloche. Taken off, the dish was revealed to be two small towers of salmon on beetroot quinoa, with horseradish. 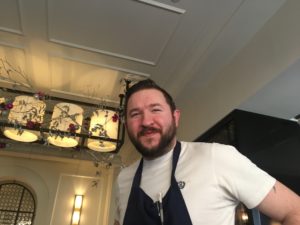 It seems Dan Moon’s local following, plus his talent, is really working. Within three months of repositioning the restaurant it was praised by UK assessors AA, and listed in Tatler‘s top 100 UK restaurants. I bet many also love the bar’s gin menu, which is introduced with Winston Churchill’s words “the gin & tonic has saved more Englishmen’s lives, and minds, than all the doctors in the Empire”. The really appealing G&T selection offers ‘Sipsmith VJOP’ made with Sipsmith’s juniper gin, Fever-Tree tonic, and garnished with lemon peel and juniper. As I went out I realised bottles of mineral water and tangerines had been put in my car. This is a really thoughtful luxury hotel.