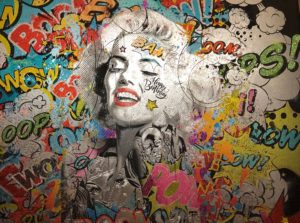 Marilyn greets you in the lobby

SBM is Monaco.  Its portfolio included three luxury hotels, Hôtel de Paris, L’Hermitage and the summer-only Monte-Carlo Beach Hotel but HSH Prince Albert wanted more, and in 2005, on nine hectares of reclaimed land at Larvotto Peninsula, Monte-Carlo Bay Hotel opened. Designed by a local architect Louis Rué, working with Belgian Atelier d’Art Urban the ten-floor building looks decidedly America-does-classical, with hemispherical arches atop walls above spacious balconies. There are a few wows in the interior design – see the collage homage to Marilyn, in the ground floor lobby. In the main, however, its interiors would not, the gal thinks, top the luxury category of any Pierre-Yves Rochon portfolio, but then, honestly, this 334-room hotel does what HSH intended.  It is a jolly good conference hotel, run by thoughtful and willing staff. 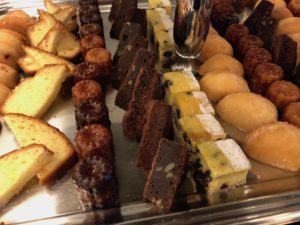 Being Monaco, things do not open early, though they did open the basement Technogym two hours early, at five, for the Preferred conference. Breakfast does not start until seven, and I would have liked an espresso machine rather than a simple kettle (but I must not complain: when the hotel opened they were charging €20 a day for WiFi whereas now it is not only free but excellent quality, complex-wide).  That complex includes the hotel, and 44 long-let apartments, an 11-room Cinq Mondes spa, hair and barber facilities – both well-patronised by locals – a casino, indoor and outdoor pools (one with a real-sand beach) and the enormous Le Sporting convention structure.  This was where Preferred’s plenary sessions, and the final gala, were held, with break-out sessions back in the hotel’s own meeting rooms, cleverly all on the first floor of the building. 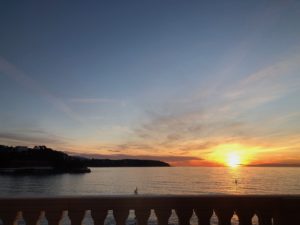 Despite the busy Preferred schedule, both business and social, I got plenty of exercise. With two long-legged Preferred hoteliers, for instance, I eschewed the bus and hiked back from our Yacht Club evening (22 minutes to reach the hotel, and then up 16 well-illuminated steps into the lobby). From the four elevators it was two minutes to get to room 829 (I used one of the non-slip bedside mats when doing yoga on the floor, which is dark Alicante marble). As always in Monte-Carlo, I loved watching the sun come up, and I quickly realised this is a hotel with an absolutely first-class conciergerie, and breakfast serving team. I only had one à la carte meal here, with Preferred’s CEO Lindsey Ueberroth and her colleague Caroline Klein – see the photo above – and the burrata and multi-coloured tomatoes of my caprese were picture-book perfect. 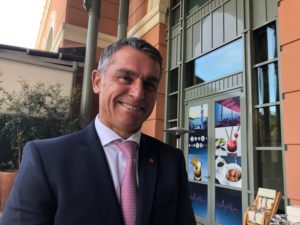 Sadly Frédéric Darnet, GM of this clever conference hotel, was indisposed at the end of the Preferred event so he was unable personally to accept the group’s unanimous congratulations at the final gala  (gosh, I have been to so many conference banquets and I never remember one where the service was so faultless and well-timed, almost robotic in its precision, and being Monaco every dish looked restaurant rather than institutional).  HSH apparently really likes this one of his hotels – perhaps because what was said at the time to be a €200 million investment was his idea in the first place and, to be honest, it must be a cash-cow.  There are, incidentally, the occasional surprises that today’s luxury travellers like, and remember. Room maids wear bright fuchsia, which did clash with the persimmon colour-way of my room. And I shall never forget a ‘local’ in-room edible, a small round loaf of bread with a white china spoon of sea-salt, and a bottle of local olive oil from L’Huilerie St-Michel. SEE ROOM 829