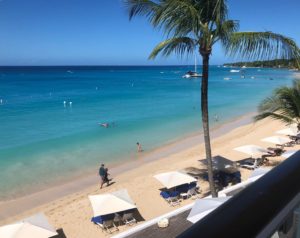 Look out at the beach

For those who want a Caribbean beach, they want to be ON the beach, and nowhere has a better offering than the luxury Fairmont Royal Pavilion hotel, on the west coast of Barbados.  All 75 rooms in the three-floor main block face the ocean, and those in ground floor rooms can step right out, through big French doors, on to a private patio – and across merely 15 feet of grass to the beach.  When the gal went to visit there were families snorkeling, playing beach football. Little wonder that these ground floor rooms are the most expensive (their daily rate also includes transport from and to the airport, which also applies to those in top floor rooms). Everyone here gets breakfast in their rate, served, I am told, in the gorgeously airy open-sided Palms restaurant. 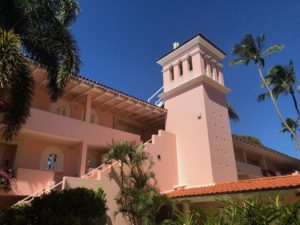 This must have been the main living room when Sir Edward Cunard, he of the shipping line, had this as a private residence in the 1940s. It was later converted to a 12-room hotel, and then the main block, with most of the bedrooms, upped the size of the whole venture.  It is immaculately kept, inside and out – its distinctive pink exterior paint is a reminder of other great pink ladies, the Beverly Hills Hotel and its sibling Hotel Bel-Air, in Los Angeles, and, in Cape Town, the ‘Nellie’, or Belmond Mount Nelson (soon to become part of the LVMH family). Fairmont Royal Pavilion is rather like The Savoy in London.  Every new generation comes to stay because, as kids, they were brought here by parents, who in turn were brought when they were young and so on. 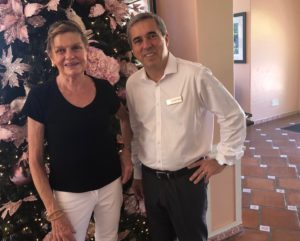 I met up with the current owner, Ian Livingstone of L&R, who said that of all his many hotels this is the one that his own children love best. The repeat factor is high, and average stay is six nights. As well as breakfasting in Palms, there are special dinners there some nights a week.  There is also the all-day Taboras, which does a great job with such local supplies as yellow-fin tuna.  At lunch with GM Jean-Christophe Martinez, I gorged on tuna tartare, with avocado, and then a blackened tuna salad. Next time I will try the hotel’s own-label Gen F wines, a Chardonnay and Cabernet Sauvignon, specially produced by Raymond Vineyards in St Helena CA. The winery, started by the Raymond family in 1970, is now owned by Jean-Claude Boisset who, with his wife Gina Gallo, could well be called today’s ‘California wine king’. 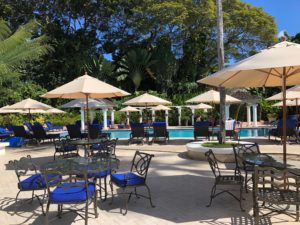 The Boissets, who married at Fairmont San Francisco, live in the Yountville CA mansion that was long-time home of Robert Mondavi and his wife Margrit Biever (I remember, when going there for a reception, it had a full-size swimming pool right in the middle of the main drawing room, which makes it a bit tricky for the Boisset’s seven year old twin daughters).  JCB, as he is often called, cleverly has turned a cubby-hole in the main lobby of Ritz-Carlton San Francisco into an elegant JCB tasting boutique. I have said before that more hotels should offer this kind of facility: now I add a plea for more hotels, like Fairmont Royal Pavilion, to have their own-label wines, such a simple operation but an extraordinarily good marketing-meets-customer-service gesture – assuming that the wines are satisfactory, of course.  Anyway, after ten years away, it was good to see that the pool, and the gardens in general, looked even more stylish than I recalled. A passionate owner, who plans yet another restaurant and other significant spend, is making this a really memorable, and comfortable, luxury hotel. The kind of place you want to go back to, again and again. SEE GROUND FLOOR ROOM 123