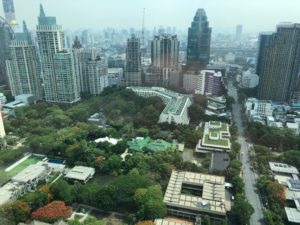 The very-English gal can report that the luxury Park Hyatt Bangkok hotel, in part of the grounds of the British Embassy, has, after one year of operation, matured magnificently.  It is still as fresh and lively as ever, and it is beginning to play like the Berlin Philharmonic, well-rehearsed but able to improvise. (Some of the 380 team members certainly did that recently: Ed Sheeran posted on social media to report that much to his annoyance he had opened his hotel room door to find a six-foot box. With the assistance of some of the team members, inside was his wife, Cherry Seaborn, who had flown in from New York as a surprise for the singer.) 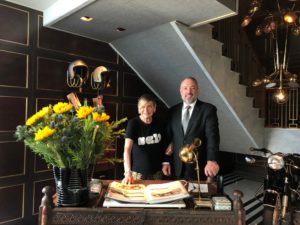 In general, says Michael Golden, Australian GM of the 222-room hotel, he wishes social media did not exist.  Why do people only post negatives?  He never seems to get any postings about his brilliant AvroKO-designed Penthouse complex, which stretches from the 34th to 36th floors of the amazing open-eight-shaped loop building, by architect Amanda Levete.  We dined back in Penthouse, and it was even better than ever.  You go in past a 70 year-old BMW R27, one of only 15,000 made. You enter a 66-seat restaurant with banquettes and conventional seats, invariably full night after night. Diners come for, say, a glass of Hedonist Shiraz 2016 made by Walter Clappis and his daughter in Australia’s McLaren Vale. Many diners choose an Aussie tomahawk, admittedly to share (I went for a 220g grass-fed Black Angus tenderloin, also Australian. 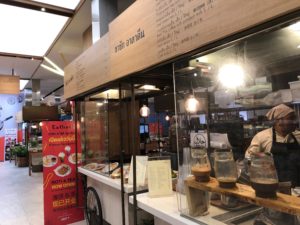 One corner of Eathai

Something I had not fully appreciated on my first visit here is how incredibly well situated this hotel is.  There are walkways underneath the marvellous SkyTrain elevated public transport, and it is so much quicker to walk from A to B raised up, by Sky Walk, rather than negotiating ground-level traffic lights and innumerable obstacles like hawker stalls and the occasional pothole.  Sky Walk took me straight into the Central Embassy Mall underneath the hotel – the owner of the whole complex, Central, is if anything better known for retail than it is for real estate.  I particularly like the Eathai food floor, at ground level, and, at floor six, the amazing Open House, one big space, the size of two football pitches, where many outer wall areas have books ceiling high, and, within, there are nooks and crannies for reading, listening, even sleeping and, of course in Thailand, eatin’n’drinking. 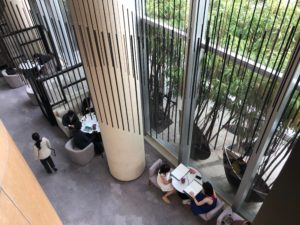 Look down, this time to breakfast

You can do this within the luxury hotel, of course. I was tempted to stay in my Yabu Pushelberg-designed suite: the Yabu Pushelberg duo have done most of the public areas, corridors and rooms. My suite was a soft harmony of colour and texture that included pale sycamore wood walls – see one of the videos below.  But I ventured out, to breakfast in the ninth floor Embassy Room, a reminder that in the past British Embassy officials might even have picnicked here when it was still Embassy gardens.  Now, the Embassy Room, an inside haven of taupe and pale purple (more Yabu Pushelberg) sprawls out, to its own mini-garden, around the hotel’s 40-metre pool.  Really, you have everything you could possibly want in this place.  I just wish I had more time. WANT TO SEE SUITE 3002 – AND ALSO WHAT THE ALL-FLOOR OPEN HOUSE, BELOW THE HOTEL, LOOKS LIKE?