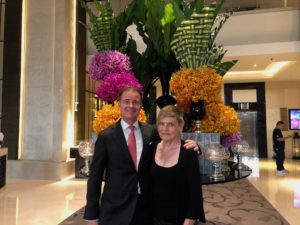 St Regis, as the gal found in Singapore, is a brand beloved of mega-hotel owners who appreciate having one property, above all else, that is a pinnacle when it comes to stars.  Just as the Singapore hotel is the Everest of the empire of Kwek Leng Beng, so St Regis Bangkok is the crowning glory for Thailand’s top hotelier, American-born Bill Heinecke.  Whereas he is more than happy to leave most other hotels in what is now a world-wide portfolio to his own Minor Group management, led by the extraordinary Dillip Rajakarier, Heinecke still has some resorts managed by Four Seasons, and one, St Regis Bangkok, managed by Marriott Luxury Brands.  And Victor Clavell, who heads Marriott Luxury Brands, is similarly lucky having Klaus Christandl as GM of St Regis Bangkok. 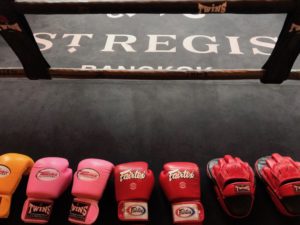 I first met Klaus Christandl when he was GM of The Imperial Hotel Vienna.  There he was immersed in the music and other culture of the Austrian capital.  Here in Bangkok it is style in so many forms. What typifies Thailand today? Well, muay Thai local boxing, for a start, and sure enough this 228-room hotel has a 24/7 Technogym that includes all you need to learn and practise Thai boxing.  This does seem, by the way, to be a growing craze – I have seen tourists, of both sexes, using up oodles of calories in top Thai hotels.  St Regis Bangkok also has an amazing outdoor pool, on the 15th floor terrace: laze around it, in landscaping by Bill Bensley no less, and look over at Royal Bangkok Sports Club. 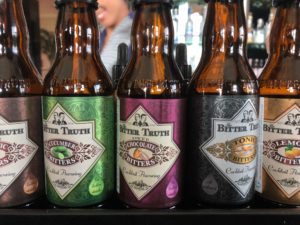 The rest of the hotel is designed by BBGM and it is elegance personified, a setting for a product that stresses butler service, and features sabre-ing of champagne, and a bar that, as well as the usual beverages, has a line-up of Bitters.  Of BITTERS? Yes, this is a selection of Bitter Truth bitters, started in 2006 by Munich bartenders Stephan Berg and Alexander Hauck.  What exactly are bitters? Apparently, as infusions that add flavours to drinks as salt does to food, they became popular in the first decade of the 19th century but only Angostura, first recorded in 1824, has survived. (Angostura is a South American tree whose bark extract apparently improves digestion, relieves heartburn and minimalises masses of other bodily complaints). 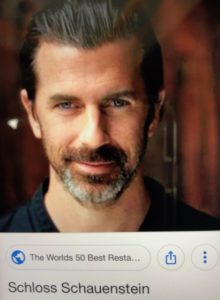 The entire food and drink scene is really important in this luxury hotel, known for its regular Saturday and Sunday brunches.  On June 5thit hosted mixologist Daniel Schofield as part of Bangkok’s World Class Cocktail Festival. Coming up, Klaus Christandl is really enthusiastic about working with Andreas Caminada, whose restaurant at Schloss Schauenstein in Fürstenau has three Michelin stars – this fascinating culinarian also oversees a bookazine Caminada Documenta, an online magazine in English and German.  Probably opening this September, Caminada will be converting St Regis Bangkok’s ground-floor restaurant into IGNIV, a sibling to the one-star Michelin he already has in Badrutt’s Palace St Moritz. Here, the new restaurant will be designed by Patricia Urquiola. Thisbodes really well for yet more outside patronage for this lovely hotel. And it will give hotel guests another reason to return. WANT TO SEE SUITE 2224?