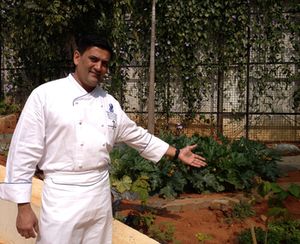 Anupam Banerjee is one helluvah nice guy – he could easily be a celebrity chef or a talk-show host but instead he is more than content to head the kitchens at the first Ritz-Carlton hotel in India, the 277-room Ritz-Carlton Bangalore. He insisted on taking the gal to see his organic vegetable garden to one side of the approach road, back of hotel, for suppliers, and he pointed out some of the myriad of different lettuces he is growing. Anupam Banerjee has a powerful background, which includes Raffles Hotel Singapore, and Mandarin Orientals in Geneva and London and, immediately before coming here to India, in Washington DC. 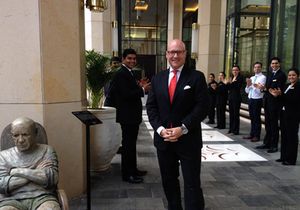 The hotel’s GM, Shane Krige, also came here to Bangalore from the USA (he had been running The Plaza in New York, for Fairmont).  He found a bit of a challenge when he came here four years ago. The hotel was supposed to open in 2004 but the fastidious quality demands of both Ritz-Carlton and the property’s art-loving owner, 36-year old entrepreneur Nitesh Shetty, delayed the opening until October 2013.  This meant that there was plenty of time for pre-opening ‘role playing’, with the local equivalent of ‘Mr and Mrs Smith’, Mr and Mrs Punshaw, acting various scenarios.  I bet the ‘Bangalore Acting Club’, as it is known, also practised the kind of VIP welcome they now perfect so marvellously. 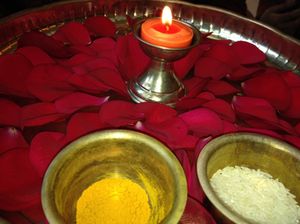 All ready for the bindi

Shane Krige had come to pick up the VIP personally. As they arrived at the hotel entrance, there was a long guard of honour of staff from many departments. Welcome to our hotel, said the gm, standing, as it happened, next to a lifesize statue of a seated Pablo Picasso by Robert St Croix, who lives in West Palm Beach.  We processed slowly between the clapping lines and, through the door the far end, chic ladies offered a bindi forehead mark for prosperity, long life and happiness.  And then it was up to the room, which had some rather prominent and masculine modern art on the wall (the hotel is mainly designed by Peter Silling, and bedroom colours are cream, burnt ochre, dull red and mid-wood). 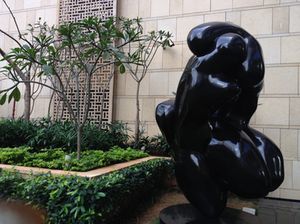 Nitesh Shetty is a man of many interests. Tennis-mad, he is at Wimbledon every year. Business- mad, he borrowed some money from his mother while he was still a teenager and started a billboard company. He got into property, in a big way, and along his travels he married the daughter of one of India’s best-known economists. He loves food – but he is teetotal – and he absolutely adores art.  For his hotel, he has commissioned or bought hundreds of crocheted rugs, framed and hung on upper corridor walls, and fabulous sculptures. There are two Botero-like pieces, one black, and one red, by the late Cuban artist Manuel Carbonell. There are thousand-diamanté hanging pendants down the circular stairwell leading from the third, main reception, floor, right down to the lowest floor, which has banquet rooms.  One restaurant, The Lantern, designed by Super Potato, has several small cosy areas – one has a wall entirely of the opposite-to-spine edges of books, packed tightly and glued together. The wall at right angles to this looks like bolts of Thai silk in a fabric store. Come here to eat dim sum. 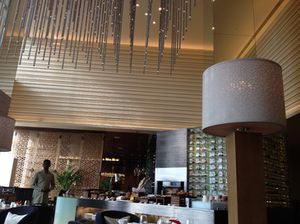 The all-day The Market restaurant

Super Potato also did the all-day The Market restaurant, which is a splendid double-height space, with every kind of cuisine you can think of. For royal Indian cuisine, however, head for Riwaz, a Silling creation. There was one outstanding signature here, Subz aur gucchi di galoti, namely pan-seared patties of morels and vegetables, and cardomom, and it was so light that the guy next to me actually asked for another one. Subz aur gucchi di galoti was, I am told, invented for Nawab Wajid Ali Shah, the last ruler – 1847-1856 – of Awadh. He had lost all his teeth, hence this dish.  This is the kind of thoughtful act that would be a typical part of the Bangalore Acting Club scenario: I got back up to my lovely corner room 831, looking down at the hotel’s front garden, to find a personalised inked note from ‘team housekeeping’. They had noticed my Colgate was nearly finished so they had put out another tube, box and all. 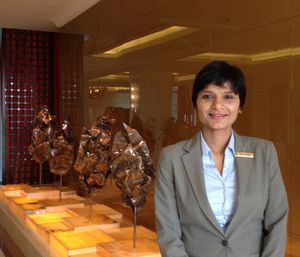 This is typical of this luxury hotel. Sherry Padda, seen here in front of a five-head sculpture by an Indian artist, Arzan Khambatta, bent over backwards to try to get the (bent) handle of my beloved Porsche Rimowa mended, and she also persevered until she finally found out how I was going on to the next place.  Oh, and by the way as I left the hotel, I had another clapping guard of honour…