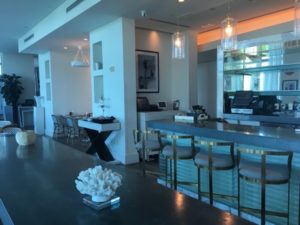 Ritz-Carlton Bal Harbour should, if anything, add the ‘beach’ word to its name as this is the one luxury hotel within half an hour’s drive north of Miami Beach that flows, as the photo above shows, out on to undeveloped beach. What are they going to do with this area? The gal first knew this place when it had just opened, in 2008, as Regent Bal Harbour, but then it lost its name and became One Bal Harbour and then it gained new owners, led by Paul Kavanos and Diego Lowenstein, and a new name, Ritz-Carlton Bal Harbour, which was actually a natural evolution since Messrs Kavanos and Lowenstein also own Ritz-Carlton South Beach. The two properties are now run in tandem, offering mutual support, and both are overseen by arguably the most famous Macedonian in the business, Sase Gjorsovski, usually known as Sasha. 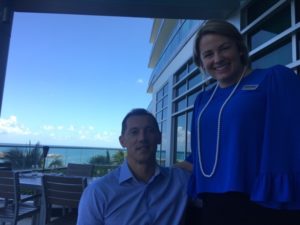 He has a Manager there permanently in the 124-room hotel, a Floridian called Nikki Berry, and we all exclaimed at the beauty of the main restaurant, Artisan Beach House, which flows out on to a big silver-columned terrace overlooking the beach. The designer is Petra Hausberger, who specialises in retail and residential and here she has put in a real beach feel, with taupe colours, a certain number of shell displays and, sensibly, a curtained off area that could even host small weddings. Some tables are high-set, communal tables. Why are these so popular? Why do singles sit with strangers at a high-up table when they would not dream of sharing at a low-set table? Both Nikki and I said immediately that a high-up table offers an immediate exit strategy if needed. 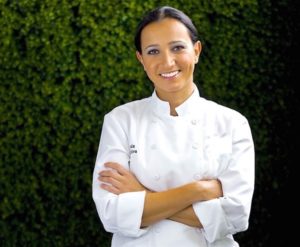 The food at Artisan Beach House, or ABH, is overseen by Boston-based Seth Greenberg, who was born in the locale here and has a good reputation in the Miami area, which is always good to attract non-hotel residents (all the hotel’s 124 letting rooms are condos, which means their owners come and use them on a regular basis and they are similarly attracted by a big name chef, and by food produced here in ABH by Seth Greenberg’s colleague Paula DaSilva). Through September, another attraction is the local Miami Spice promotion in leading restaurants, including this one. And any time, a major attraction at this luxury hotel is Bal Harbour’s shops, five minutes away by house car.