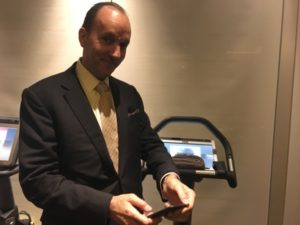 Pierre Perusset checks something on his smartphone

Trust the world’s tallest hotel, Ritz-Carlton Hong Kong, to come up with yet another something different. Under its owners’ representative, Ricco de Blank, and its area President Ritz-Carlton, and its very own GM, Pierre Perruset, this is a luxury hotel that continually surprises. Last time the gal visited it was the Caviar Bar, a Caviar House + Prunier development. This time it is the former banker-in-Madrid, Rafa(el) Gil, who is now cooking like a dream in Ozone, on the hotel’s top, 118th, floor. As Rafa Gil says, come into his private kitchen (see above). 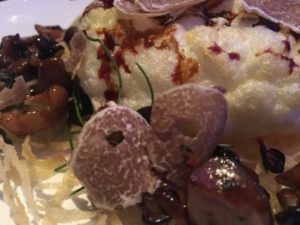 Soufflé of a single organic egg

He was actually born in São Paulo but all his adult life seems to have been outside Brazil. He obviously thought cooking was more creative than finance, especially in Spain over the last few years. So here he is, designing and producing such exquisite dishes as the single oyster with strawberry and yuzu foam (it is worth noting at this point that long-time food pundit Donald Morrison says anyone over 50 these days prefers simple, easily recognisable dishes, and nothing foamed or sauced but honestly, every dish Rafa Gil produced that night looked, and tasted, magnificent. See his signature egg, here. 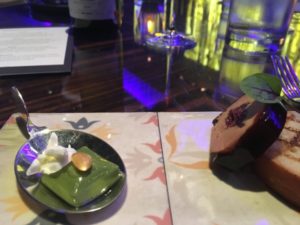 This is one single egg, organic of course, souffléd with mushrooms on a potato nest, and then he grated white truffle on top. The meal also included, but not necessarily in this order, a single spherical pesto ravioli shape, with mozzarella, served alongside, as if a happy couple going to the altar, a foie gras terrine with Port outer casing, and slices of roasted brioche. There was a circular rice and sesame cracker topped with smoked eggplant, and miso sauce around, and there were bite-sized slices of Australian Wagyu ribeye with a millefeuille of vegetables and other baby vegetables. 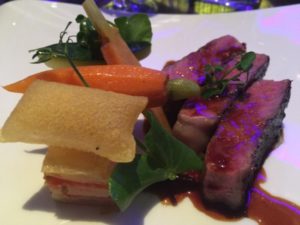 Stop stop, I can hear the purists protest, this is too much. Well, honestly, although this luxury hotel rises to 1,574 ft above ground, nothing it has done – so far – is too much. It all makes a statement, like having the world’s highest outside bar, the world’s highest caviar bar, on the 102nd floor, and having a swimming pool up on the rooftop with an LCD ceiling, and so on. The other night, during Force 8 Typhoon Haima, it must have been fun. Instead of taking one elevator from ground up to the 103rd floor main lobby, guests had change from one elevator to another, four lifts in all, as the cabins sway in high winds, well over four feet total, said Pierre Perruset with a smile.