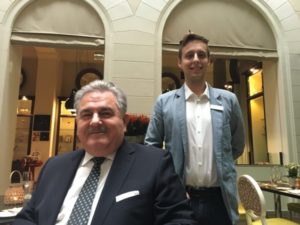 Gerhard Mitrovits and a serving colleague

With such a dominance of Austrian bakers and other culinarians working not only on cruise ships but in luxury hotels around the world, it should not be a surprise, says the gal, that a return to Vienna was to prove an odyssey of edible highlights. Add the fact that the recently arrived GM of Palais Hansen Kempinski, Vienna, is renowned Austrian foodie Gerhard Mitrovits and the scene is set for an amazing performance, and that is what it indeed turned out to be. When the hotel opened in March 2013, it was already obvious that parts of the concept would be outstanding. 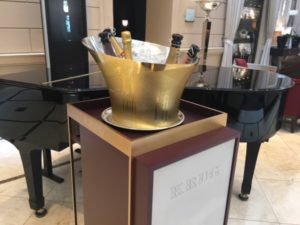 This is an imaginative conversion of the palace that Danish architect Theophil Hansen built for the 1873 World Exhibition – but then the Exhibition was cancelled because of a cholera epidemic and the seven-floor building, on Schottenring, right next to the Bourse, became offices. Today’s architect, Boris Podrecca, from Vienna, has skilfully enclosed central courtyards with glass ceilings, and the main elevators, also glass walled, have become an art feature, rising up from the lobby that is a meeting place for local bankers and financiers. There is also a glass-walled cigar emporium behind, for those who must.

With Mr Mitrovits in charge it is not surprising there is a Champagne bucket, filled of course, in the lobby (he used to add highlights like this at his last base, in Beijing). There are bottles of Champagne, too, at the breakfast buffet in Die Kuche, and this is real stuff, too, Moët rather than an anonymous bubbly. But then the entire breakfast buffet is sensational – see a video below. You can make your own juice, you can wander displays of all the usual start-the-day items plus an assortment of smoked fish artfully displayed among shelves of cookbooks. There are milk varieties, and cheeses galore, and the chef is not surprisingly smiling – he knows this is good. SEE THIS BREAKFAST VIDEO, and then continue reading 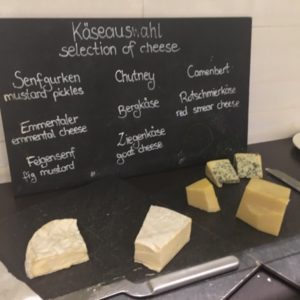 Everything is well labelled

And the ambience is outstanding, too. Designer Jean-Claude Laville had one of those glass-ceiling spaces to work with, which helped, but he has put in two gigantic living walls, so you eat in masses of light, looking at live plants. We had dined there too, actually, as the Michelin-starred Edvard was closed that night, so it was Austrian comfort food, a Wienerschnitzel with parsley potatoes and creamy cucumber salad and sides of spinach and root vegetables, and an outstanding Burgenland red. I realise, of course, that I have been so carried away by this luxury palace hotel’s food that I have not mentioned that it has 152 rooms, the smallest of which is 330 sq ft, rising up to the two-bedroom Presidential Suite, ten times that size, with bulletproof windows. If you want to see what suite 167, not presidential but pretty impressive nonetheless, looks like, SEE ANOTHER VIDEO BELOW