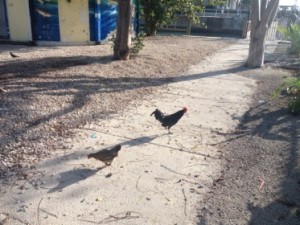 The first thing you hear as your luxury floating-hotel known as Silver Cloud noses into Key West is the hilarious sound of roosters crowing. They and their hens are feral, with complete run of the eight square mile island. In 2004 a chicken-snatcher was hired but the job was so controversial he quit after a year. Some residents are simply fed up with the 24/7 noise: they can borrow traps from the Wildlife Center, which last year relocated 1,500 birds, later shipped to organic farms in Central Florida. The gal feels quite sorry for these transplanted migrants, who had lost their freedom. 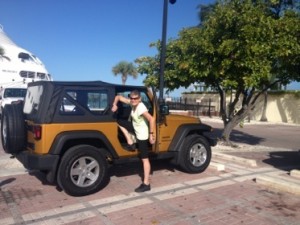 Getting into Paul’s Jeep

Key West is at the very south of the 800 islands that trail, west-south-west, from Miami. Now, most visitors drive here, though it has an airport. I was picked up from the ship by Paul Bartush, Waldorf Astoria‘s VIP guru, in his new Jeep, which did require certain agility to enter or leave. We drove across the island – eight square miles total, population 24,000 plus tourists, unemployment a mere three percent – to the two Waldorf Astoria hotels here. The larger, Casa Marina Resort and Beach Club, was completed 1920 for Henry Flagler, to house those who travelled here on his railroad that linked all the Keys on its way south. 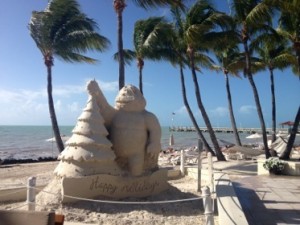 One of the professional sandcastles at Casa Marina

Casa Marina has retained much of its former glory, with 20-foot ceilings and an august lobby with eight ceiling-high cypress columns rising from a hardwood floor. Those who come here regularly to chill out are busy executives with small children, who love the play facilities and admire professional sandcastles: that day, one sandcastle had scrolled into it ‘Jessica, will you marry me?’. Presumably she did, or she would have erased the inscription. A big international sandcastle competition was held here last week, dominated, apparently, by Brazil, which reminds me of the absolutely enormous professional castles along Copacabana beach. 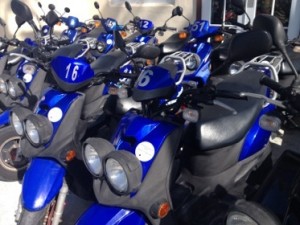 Stay at this 312-room luxury hotel and you have water activities, and a good 24/7 gym and a splendid new Pevonia Spa al Mare. You can also whizz round town on a rented scooter, a dangerous enterprise as no-one seems to wear a helmet and few visitors seem to know how to steer them, but still. I would prefer to remain here, in the peace and quiet of Waldorf Astoria Casa Marina, rather than head to main-town, where honestly much is tawdry and tacky (after shopping George Town on Grand Cayman, the souvenirs here are pathetic, though I did admire the excellent arrangement of bamboo-fabric clothes in a ground floor shop of the Westin (also loved Sunday brunch at Ocean Key Resort, a mere $49 with unlimited mimosas or bloody Marys).