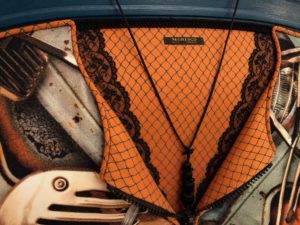 Tying in with ILTM Cannes the first week of December, the gal makes an annual pilgrimage to one of the most iconic luxury hotels on the entire French Côte d’Azur, Le Negresco, Nice.  Every year there is something new.  Take room 422, called the Gaultier Suite, even though it is merely one bedroom, one bathroom – see the video below.   Designed by the hotel’s own people, it is dedicated to a regular guest (though one wonders if Jean-Paul Gaultier would have this ‘car wreck fabric’ in his own home). One door is covered with the fabric, as are walls and both, side-by-side, bedheads, with, in addition, plain fabric to form fronts of what looks like jackets, anonymous, but Gaultier in where the back collar label would be.See the photo on left. 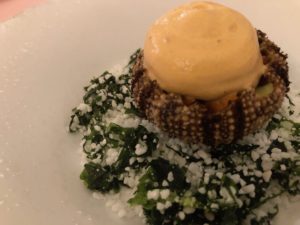 The other main innovation is the arrival, three months ago, of Virginie Basselot, one of France’s only-two MOF, Meilleur Ouvrier de France, chefs. Born in Normandy, she wanted to be a fighter pilot but, instead, followed her father into the kitchen.  At Le Negresco, she looks like a fresh teenager – see the image above, with her boss, hotel GM Pierre Bord (the sculptures are by a Nantes fashion designer, Jeanne de Loulou, 2004).  In fact, I am told, this MOF never raises her voice in the kitchen but when she needs something she merely taps her cooking spoon against a hard service and the seen-it-all guys around fall immediately quiet, in awe.  And she does cook like a dream. She sent out amuses, one-bit salmon gougères and tarts, and this marvellous sea-urchin (oursin). 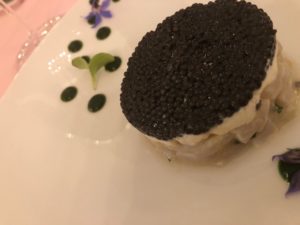 Le Negresco’s fine dining restaurant, Chantecler, does offer a seven course tasting menu, with five paired wines as requested, but we went à la carte. See my chosen starter, a tartare of seabass and oyster bound with lemon cream and topped with Sologne caviar from the Loire Valley.  I went on to a Basselot long-time signature, fillet of cod cooked with seasonal vegetables and, served on the side, a lemon balm butter. We drank the most local wine available, Le Clos dos St-Vincent 2017, Vin de Bellet.  It was lovely to see the new-look restaurant, complemented by a noticeably-Gen X of keen, and well-trained, servers. 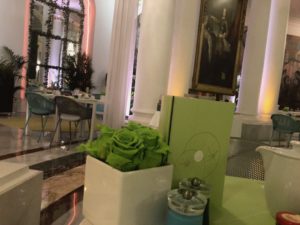 Next time I visit this luxury hotel there will, as always, be innovations.  Right now Pierre Bord is supervising a complete re-do of La Rotonde, the restaurant that once had rotating carousel horses but they, and it, died a prolonged death.  Now Paris designer Marc Hertrich, also working in Mauritius on Constance Hotels’ forthcoming C Resorts, is here finishing a new-look, with a sky ceiling that will give a fresh and 21st century look: in the meantime, the Bord-Basselot team has created Le Popup37, an absolutely charming temporary day- and evening-long base for Niçoise food with a vibrant touch.  I could only try it at breakfast, but the baguettes and Poilâne-type sourdoughs, and Savoie yoghurts and butters were truly the best, and the salt and pepper mills, of course, were Peugeot. SEE #422, THEMED FOR JEAN-PAUL GAULTIER