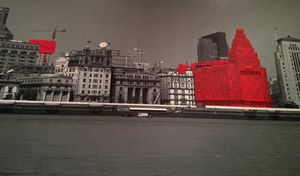 The Bund, stylised of course

The Bund, on the west bank of Shanghai’s Huangpu River, is one of the world’s iconic waterfronts. Think of some contenders – the Houses of Parliament on London’s Thames, the Eiffel Tower on the Seine in Paris, the 7pm Aarti on and in the Ganges at Varanasi?  But none of those has the plethora of luxury hotels that you find along the Huangpu, from Indigo to The Peninsula, with several along the way.  The gal loves this artistic version of The Bund, behind the concierge desk at The Peninsula Shanghai. 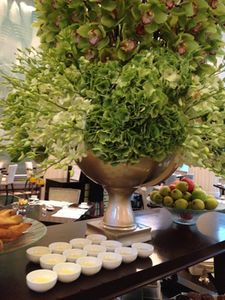 Breakfast, in the lobby…

There is so much to say about this amazingly timeless hotel – three and a half years old, could be a hundred years, could be one-day new – that this time I am going to concentrate on breakfast, two of them (yes, I eat a lot).  You can eat in your room (I did, but it was dinner, and loved looking out at The Bund and its busy life).  You can eat in the main lobby, looking up at Art Deco fringe-type chandeliers far overhead.  The central food table is as exquisite as is possible, centred around one of the flower displays supervised by Ayumi Yamada, a Japanese master-artist who does the flowers for the Imperial Palace in Tokyo. 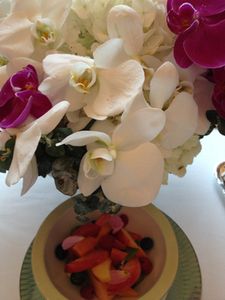 Breakfast, in a suite…

The Empress of Japan loves flowers.  My good friend Yoshie Ueki, master-artist of embroidered flowers, was a Gaikin, which meant she had gone to the private elementary school held in the Palace for the now-Emperor and ‘a select few’.  Every year when the spring flowers bloomed in the Palace grounds, the Empress would invite Yoshie-san round to walk with her, and admire each bud individually. Back to breakfast. My second breakfast was supposed to be on the hotel’s helipad but the weather said otherwise, so we convened in a suite. More flowers, of course, as the menu started, fruit with jasmine tea gelée and Thai basil. 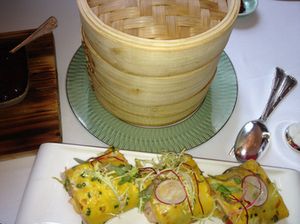 There was a Shanghai crêpe filled with lobster, bean sprouts, chili sauce and coriander. There were steamed vegetable dumplings, and smoked salmon rösti with chives and crème fraîche. The vegetable frittata, with artichoke, tomato, spinach and goat cheese, came with a flower, as did lemon ricotta hotcakes with ginger-berry compote.  I hear about breakfasts served last week, three days running, for Ferrari Racing Days China, at the Shanghai International Circuit (F1). For 1,200 hungry enthusiasts, the chefs from here took 12 catering trucks carrying 11 tons of equipment, 48,000 pastries, 8,000 dim sum and 1,200 kg of sliced fruit. The menu included glutinous rice dumplings with shredded coconut, and mango sage pudding. 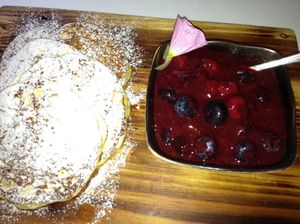 I hear about another recent event, the arrival, to full fanfare and speeches and champagne, of the hotel’s oldest Rolls-Royce (it has, well, one or two…) – see the arrival on YouTube. This 1934 Phantom II is one of four that the company owns – the others are at the Hong Kong and Tokyo hotels, and waiting for Paris to open. It was botoxed in England, at Ashton Keynes Vintage Restoration, which involved upgrading all mechanicals and adding air conditioning and audio, and somehow finding space for connectivity and radio equipment, and a refrigerated drinks cabinet. Perfect for your breakfast mimosa. 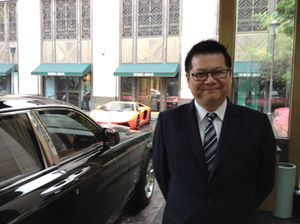 There are so many events at this luxury hotel.  It will, for instance, be official base this October of the International Business Leaders Advisory Council IBLAC, started 25 years ago by then-Premier Zhu Rong Ji.  This year’s meeting will be a chance for new Shanghai mayor, Yang Xiong, to show his city to world leaders. Doubtless, under present circumstances, there will not be the constant line of Ferraris parked outside The Peninsula that was the norm during Ferrari Racing Days China. Just one remained, as I left for my next place – in a Peninsula green Rolls, considerably younger than the 1934 doyenne and, amazingly, not a flower in sight.