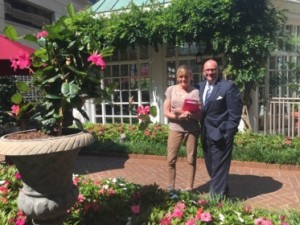 Shane Krige would, in former days, have been called intrepid. Today this luxury hotelier could be described as always looking on the bright side, or, to put it another way, at the half-full rather than the half-empty glass. Not many would have given up being GM of The Plaza in New York to head for the chaotic traffic and infrastructure of Bangalore, to somehow open that city’s imposing Ritz-Carlton (not exactly relevant but its owner, billboard tycoon Nitesh Shetty, was funded by Och-Ziff, now one of the two largest shareholders in Starwood Hotels & Resorts). Anyway young Shane did that, finished that, and, says the gal, returned to the family ambience of Fairmont, back in the USA. 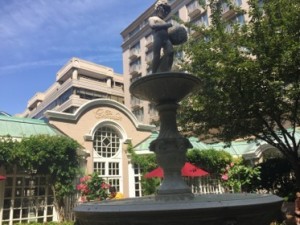 As GM of Fairmont Washington DC Georgetown, he has taken over from another passionate hotelier, Mark Andrew, who has since travelled as far west across mainland USA as he can. Shane Krige is smiling. His 415-room hotel has splendid new owners, MetLife, who are, he says, in it for the long term. Not for them the horrid and increasingly prevalent pattern, especially in the US, of faceless owners buying to turn the screws and then sell on, for a mammoth profit. Not only are MetLife distinctly proud of this asset, which they intend to keep, but they are about to spend a fortune on bringing the interior of the 1985-vintage building up to the present day. The hotel has the advantage of having a stunning garden, with a Colonnade conservatory to one side. I am told that the garden will seem larger as retaining walls around parterres are being narrowed. 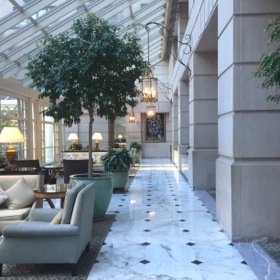 Looking along its airy lobby

The lobby, rather like a marbled conservatory actually, is already the meeting point for those who live around.   They come and meet their friends, and do business there. Especially in summer they also come to eat at the tables set up in the garden – it is the standard menu from Juniper, the all-day restaurant, but I can attest that the wheat walnut bread with honey from the hives on the ten-floor hotel’s rooftop, and organic greens salad, and a ribeye from Allen Brothers, founded in 1893 in Chicago‘s Union Stockyards meat market, all taste even better when dining outside. What to drink on such a hot, steamy night? Well, an iced glass of Charles & Charles Rosé 2014, from Columbia Valley WA did the trick. There is something about eating outside in a hotel’s inner courtyard or garden, as luxury hotels in Paris have been promoting for years. 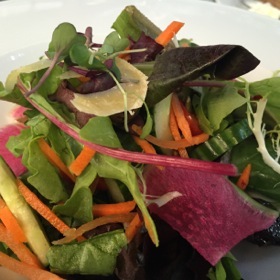 And when you know you are helping others you feel especially good: Shane Krige and I shared a Smithsonian Dessert, which supports The Smithsonian’s ongoing endangered animal research and conservation. I certainly think it was worth the calories tasting all this to do good. Tasting all this? How many diners would eat, albeit it small portions, of an eight-layered red velvet cake with cream cheese icing and blueberry syrup; fresh blueberry and toasted crumbled oat ripple icecream, and fresh blueberries…   Thank goodness this hotel has a serious Balance Gym, with a substantial indoor pool, and I am glad to see it still offers CrossFit workout classes. Balance Gym, by the way, was one of the stallholders at the hotel’s annual Sustainability Fair, last Friday, August 21st, 2015: Shane Krige invited suitable concerns, free of charge, to show local people what they were offering. Other products included a Center for Cosmetic Surgery, District of Columbia Office on Ageing, and the Fairmont Beekeepers, led by the hotel’s head of security. Hope the visitors had some of that honey bread.