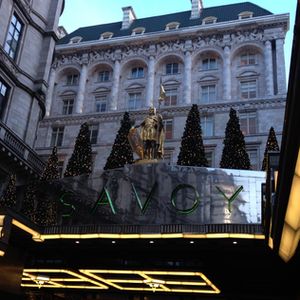 As you turn south off London‘s The Strand into Savoy Court, you see ahead of you the gilded statue of Count Peter of Savoy above the entrance to this eminent luxury hotel.   Immediately to your right, now, is a topiary statue of a cat. This is Kaspar, whose history goes back, says the gal, to 1898. South African diamond magnate Woolf Joel was hosting a dinner for 14 but one cancelled. Another guest, somewhat superstitious, said never have 13 at a table. Joel took no notice, but weeks later he was shot dead back in Johannesburg. The hotel offered to have a staff member sit in at any subsequent 13-strong dinners but not surprisingly scions of society did not like that, so later a cat sculpture, made specially by Basil Ionides in 1926, became a substitute. 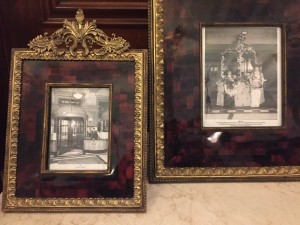 Old photos in the lobby

The Savoy has a dedicated museum room which presumably has some early photos of Kaspar the cat sitting at table, a linen napkin round his neck – I remember going to one such lunch, a decade ago, with the statue in one seat (one not turning up is sometimes excusable but there was a gastronomic dinner at Le Crillon in Paris when Philippine de Rothschild was so furious that her entire round table was empty but for her, that she more or less threw the vacant chairs around Les Ambassadeurs, which was not what that Michelin-starred restaurant was used to). Sensibly, The Savoy only has one or two old photographs out on general display. It can be depressing to be surrounded by too many memories of the good old days. We want today, and tomorrow, with reminders of the past kept below-the-radar. 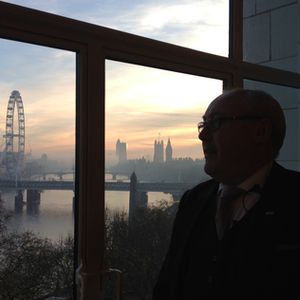 Looking out at the Monet view

Those rooms in the 263-room hotel that look down to The Thames, and over it, are really special. Turn slightly right to the London Eye ferris wheel, and even more slightly right to the Houses of Parliament. As the sun sets I am always reminded that this was where Monet painted, in room 610 and 611. Sixth floor suites are also desirable because they offer a jolly good work out. 107 steps down to the lobby or back up again, or use an elevator. There are 18 River Suites in all, each at least 800 sq m. Little style touches include white Savoy-labelled robes with lime-green edging, matching the lime green ribbon adorning the cream satin hangers, and the green presence – Savoy Green, says Pentagram – on the room’s collateral. 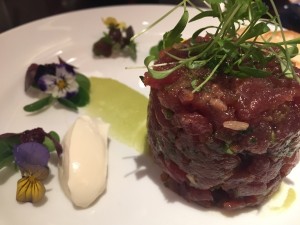 Back to Kaspar the cat. The luxury hotel has brought him to even more prominence with Kaspar’s Seafood Bar and Grill. There is a clever permanent-fixture central bar and serving area, where you can sit up at the counter or pull out a shelf, like a drawer, so that two can sit either side, facing each other. We actually sat down at ordinary tables, and while it was really tempting to try a feline cocktail, say a Tale of Kaspar’s, namely aged Diplomatico rum from Venezuela and a very rare Palo Cortado sherry aged for 30 years, both complemented by dry orange curacao, French bitter, all shaken together on ice and served on the rocks. Honestly, though, my yellowfin tuna tartare with avocado did not need anything more. Some Savoy regulars, before heading for the adjacent Savoy Theatre – where Guys & Dolls opens next Thursday, December 10th, 2015 – prefer the main lobby’s Temptation Wheel Menu, for choose your own, from a choice of 12 each, one cocktail, one dessert and one chocolate.