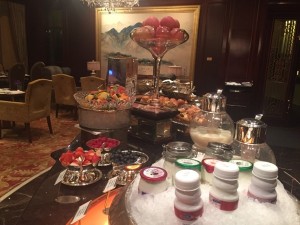 This is a Tale of Two, no not Two Cities, but Two Buffets. Why, you may reasonably ask? Well, the luxury Island Shangri-La Hotel, Hong Kong, has two elegant 56th floor spaces right next to each other. One is the Horizon Club, so sophisticated that it always reminds the gal of what it must be like waiting in an anteroom before going to have an audience with His Holiness, or perhaps M. Hollande. Next door is Pétrus, the hotel’s highly-prized wine emporium that also serves lunch and dinner, and breakfast too (it has a new chef, Ricardo Chaneton). To get to the 56th floor you ascend in one of the elevators looking into a 16-floor atrium that has the world’s largest Chinese silk painting, The Great Motherhood of China – see above. It is a total of 160 feet tall, by 53 feet wide. 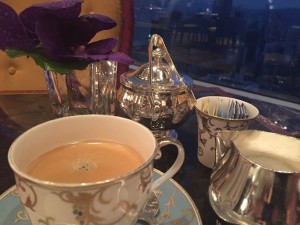 .. and its elegant table setting, and view

First, I went to the Club buffet, which is continental only, and sat under five glorious multi-light chandeliers – there are a total of 770 chandeliers throughout the 565-room hotel. I listened to classical music. The wood tables were set with purple orchids, and linen mats that, like the 22-inch square napkins, had what is called ‘pulled thread’ borders. Chairs are wood, with marine, or old gold, padded upholstery. I had a Ferme des Peupliers low-fat yoghurt, and an excellent cup of coffee in a blue and gold floral cup, Narumi for the hotel. Then it was time to move on, or at least next door. 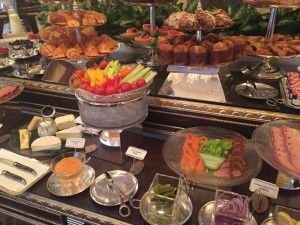 In Pétrus, I sat under eight more chandeliers, and listened to quiet opera. Here the table had a yellow overcloth, a gold under-cloth, and orange orchids. My square napkin, also 22 inches along each side, had a simple stitched edge. The china here is white. I could have gone for an English, Japanese or Chinese set, the last with stir-fried noodles, bean sprouts, pan-fried pork buns and steamed turnip cakes. I went instead for a simple omelette, which came decorated with wisps of leek shavings and a purple orchid, and my toast was in an elegant silver holder. And now I felt deliciously satiated, and ready to face another day. 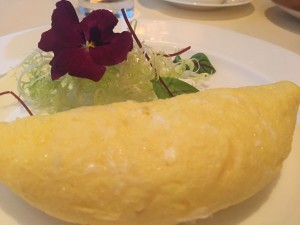 I had dined last night with Franz Donhauser, an inveterate hotelier through and through – his family, back in Austria, had run their own establishment for three centuries (yes, that is right, over 300 years). Actually this luxury hotel is coming up for its own anniversary. It reaches its quarter century this year, and among the many festivities is a big cocktail on March 1st, 2016, taking over the whole of the 56th floor, both the Horizon Club and Pétrus. As we toyed with our barramundi in the Lobster Piano Bar, with a Canadian crooner, female, actually perched atop the Steinway or whatever it was, the sommelier, Yohann Jousselin MS (a Loire boy) came over to remind us about his Pairing of Pétrus dinner, scheduled for April 20th, 2016. Sadly, I will not be in Hong Kong that night.