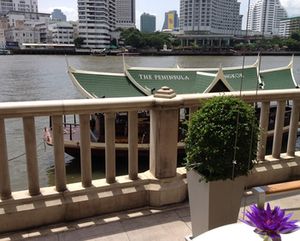 A single orchid on a riverside table…

According to Wikipedia there are twice as many orchid species as there are bird species – and four times the number of mammal species.  Let us break it down a bit. The largest family member is the Bulbophyllum, with 2,000 types, followed by the Epidendrum (1,500 types), the Dendrobium (1,400 types) and the Pleurothallis (1,000). The gal is happy just with her single orchid plant standing proudly on her dining table back home, and she loves nothing more than, say, one orchid on a terrace table at one of Asia’s top luxury hotels, The Peninsula Bangkok. 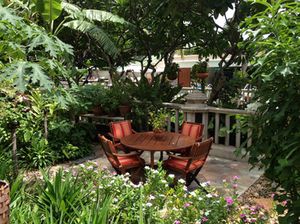 Dining for four, in the chef’s herb garden

This hotel is full of flowers – and greenery, in fact.  Walk to the pool and you go past the chef’s herb garden, with all the bushes carefully labeled.  There is also a dining table there, ready for up to four herb-to-table food enthusiasts to eat in the middle of it all.  There will shortly be another chef’s table, in the Chinese restaurant, Mei Jiang. We actually dined in the lobby, great idea, very relaxing. We were shielded from the grand pianist by a six-foot display, of orchids, of course. It was amazing to get a tomato salad, followed by a bit of salmon on spinach, without any flower decoration, though we did have a vase of orchids on the table (this is the kind of attention-to-detail place that replaced the bread basket as soon as a single home-made grissini had been taken). 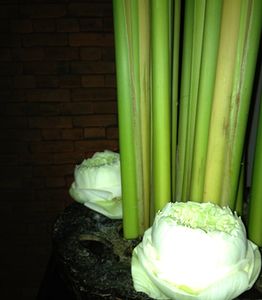 Lotus flowers in a spa corridor

The spa here, with ESPA products, is a gorgeous three-floor teak house, 51 steps from the ground floor to the top floor – OK, you can use the lift but you miss going past walls of tiny old black Shanghai bricks, and you miss intermittent displays of giant lotus flowers with bamboo shoots almost growing out of them. My treatment room had an inset bamboo panel in the ceiling, marvellous to look up at when lying on one’s back.  It also had a Thai carving at the far end of a raised pavilion with two floor-set Thai massage beds (there were also two massage beds on legs, designed, I think, by the former singer Clodagh, who now seems to have gone into design in a big way). 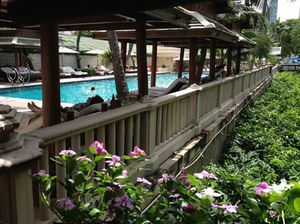 A flower-filled klong alongside one of the pools

My treatment was m-a-r-vellous and afterwards I could have relaxed in the hydra bath for ever.  But there were more flowers to look at.  Walking back from the spa to the hotel I passed the end of a klong completely covered in living greenery, with some purple flowers on the walkway balustrade.  I could see through to the three pools, end to end, that are, with the spa and the golf, big attractions to Japanese travellers. Yes, the owners here also own Thai Country Club, 40 minutes’ drive away, and you can play its 18 Denis Griffith’s holes – save the drive time by helicoptering there, right from the 37-floor hotel’s rooftop. 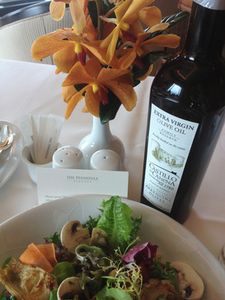 Orchids on our table in the lobby lounge…

All this action had also included a jolly good work out in the gym (watched T. Blair kowtowing at Shimon Peres’ 90th birthday party, while fellow guest B. Clinton held himself with dignified poise and Barbara Streisand yelled a few songs).

To save time, I decided on a treat that most busy travellers enjoy from time to time, lunch by myself, room service.  I ordered up a Peninsula salad, with artichoke hearts and pine nuts. Hold the dressing, send up some of your design Castillo de Canena first-press extra virgin olive oil, from Spain, and, while you are about it, may I have a bowl of fries, no salt? In fact they also sent up iced water, with a cap on top to prevent spills, and a vase of flowers, orchids of course. 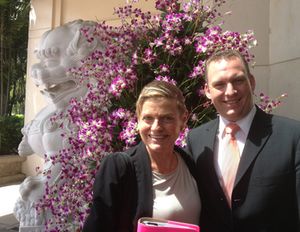 .. and masses of them, behind chef Mike Wehle

The chef, Mike Wehle from Munich, is on duty this weekend and he was there to see me off.   Yes, we could have posed by the hotel’s lovely tuk-tuk – they have a range of transport, not only their twin-engined helicopters, and the ferry boats taking you five minutes across to the hotel’s salon on the river’s east bank, and the tuk-tuk, and BMW limos.