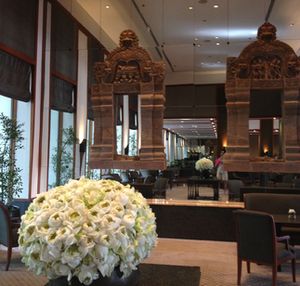 Look along the length of the lobby…

The word Sukhothai means triple jewel dawn of happiness and that is what this iconic luxury hotel in Bangkok imparts, not only in those lucky enough to stay there but in those who ‘work’ there, too.  It has been there since 1991 and it provided a calming environment then, and it still does 22 years later.

The gal uses the verb work, but it does seem that every one of the 400 people who perform in this well-rehearsed but seemingly impromptu theatre seems thoroughly to enjoy it. The result is an over-riding calm – look at the super-high lobby, designed by Ed Tuttle. 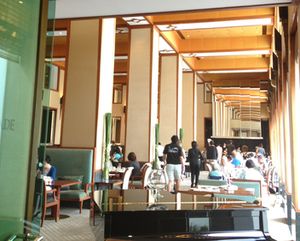 Look along the length of its casual restaurant…

And the calm is despite the fact that the 200-room hotel is invariably almost full and plenty of knowledgeable locals come in, for breakfast, lunch and dinner, or a drink.  You feel calm as soon as you come into the hotel. The lobby’s focal point is dominated by a 12-foot arrangement by Sakul Intakul, a former engineer who does the flowers in the Royal Palace. Today’s arrangement, done at six in the morning by a barefoot lady standing tiptoe on a black table, honours Buddhist enlightenment.  At its base, white lotus flowers float in a couple of inches of water (these represent Buddhas, the cornerstone of Buddhism). Above these rise vertical fragrant tuberoses, symbolizing that Dharma teachings spread quality, and high above this are reeds, a reminder that Sangha, the community of monks, promulgate the Dharma. 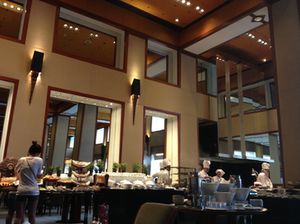 ..and up to its high ceiling

Actually it is surprising that the entire Bangkok intelligentsia – as in gourmet intelligentsia – do not come here for the breakfast buffet. It is superb. Just to mention a few unusual items: detox drinks, Cumberland sausages in a whole Catherine wheel that just fits the orange Le Creuset pan, and gigantic whole farmer’s breads with knives that really cut (if you can tear yourself away from the wholegrain croissants, that is).  Oh yes, and the linen napkins are about three feet by three feet. Locals come en masse, by the way, for the weekly Sunday brunch, and the weekend chocolate buffets in the lobby – I think of the chocolate buffet at Four Seasons Milano, and wonder yet again who first realized that bringing chocolate themes into restaurants, or even lobbies (and in one or two cases spas) can actually make money, and lots of it. 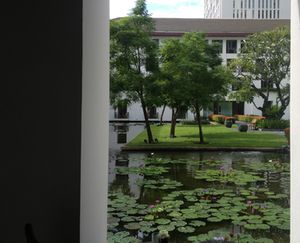 From 903, look across a calming inner courtyard

I go back up to 903, on the top floor of the hotel’s tallest block.  This one-room suite, which connects to its neighbour, has just been refreshed, with some of Ed Tuttle’s original silks replaced by soft velour-look walls, one in palest mushroom next to one in palest sage. Nothing grates. Heavy teak furniture is upholstered in the same shades; the bed is by day simply adorned with rust-coloured silk cushions that match the bedhead. By night, mirror panels either sides of tall windows pull across to present big mirrored areas, giving even more space to the room. Next morning, pulling those mirrors to either side, I look down at the square courtyard far below, its walkways and grassed areas broken up by calming pools. 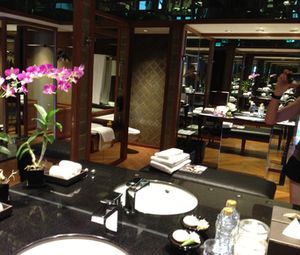 A view of 903’s fabulous bathroom

From its very start, in the last century, the Sukhothai has been known for its bathrooms, which soar and soar, way up from polished wood floors inset with brass ‘diamonds’.  There are mirrors, to infinity, around both washbasin alcoves and overhead, as if a cornice. There are orchids – of course.  Well, what else CAN one put in a bathroom?  My ideal bathroom would have big-big washbasin surrounds, an electronic magnifying mirror coming out from the wall, and a pair of scissors (so useful for cutting open q-tip packs and a myriad of other housekeeping chores). The ideal would have a split of perfectly-chilled champagne, 24/7 – more than that would be greedy. And lots and lots of orchids.  Like here. 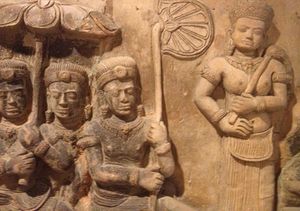 A frieze on the ninth floor corridor – go it, gal!

Part of the calm of the Sukhothai is thanks to its long-time boss, Greg Meadows, who went away for a time to start something else but soon moved back to his karma home. Even when he is not here the place runs like that well-directed ad-lib performance…   calm comes too from the many sculptures around the place. There are gods here and gods there, and, up on the ninth floor, a frieze that makes any GirlAhead love this luxury hotel: our heroine is being entertained by a group of male musicians.