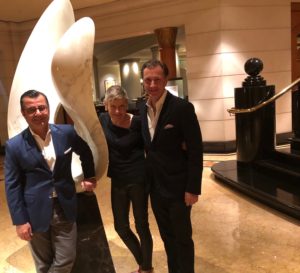 Elegance and thoughtfulness are two keys words among the many that can be applied to what is now one of Singapore’s more venerable luxury properties, Four Seasons Hotel Singapore.  Wow, says the gal, it opened in 1994 (with an Executive Chef called Bernhard who, pre-opening, invited media to a show-off breakfast, which meant having to climb up to the 20th floor rooftop as the elevators were not yet working). But that was an age ago.  Today, everything is superlative. Four Seasons’ President Asia Pacific Rainer Stampfer dropped in to join the hotel’s GM Antoine Chahwan, who had just flown in from Ho Chi Minh City, for a truly modern-chic dinner. 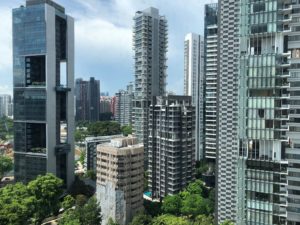 Modern-chic eating is what you want, superlatively presented and full of taste.  Antoine Chahwan has introduced, in One 90 all-day dining, a semi-buffet, which means a fabulous antipasti buffet – oh the tomatoes, oh the burrata (see a video below) and then your choice of main course, brought to table.  And after that I went back up to room 1619, and marvelled at the beauty of the new design, by Paula O’Callaghan of HBA.  The colours, as another video shows, are soft eggshell blue with bronze and I do like the way the drapes are light-bronze at the top, dark bronze at the base.  Overall, too, the idea is to give maximum space, though cleverly, and thoughtfully, they have mobile bureaux if you want more storage space. 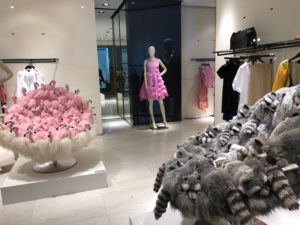 What I wanted was IT help, and of course being Four Seasons it was on hand.  Interestingly the head of IT came with Front Office Manager Michael Casey who, dare I say it, has missed his calling.  He would be the world’s best technology teacher in a primary school. He knows what he is doing and he patiently talked me through everything in monosyllabic non-tech language that even I and any five-year old could understand.  Honestly, Michael Casey saved my sanity, and when he had finished doing whatever was needed I took a walk through the internal arcade that leads from this lovely hotel through to Singapore Hilton, also owned by the Ong dynasty, and thus to Orchard Road.  Most of the retail along the arcade are fashion-lifestyle brands belonging to Club 21, another Ong initiative, and much more fun today than I remember from past visits (love the chairs covered in pink flamingoes, or grey racoons). 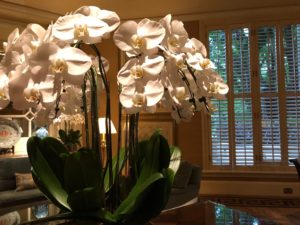 Looking into the residents’ lounge

Of course the gym here is 24/7 and I watched BBC World News, from both London and Singapore, where today local anchor Rico Hizon had as his guest Australian fitness phenomenon Kayla Itsines, here to do one of her Bikini Body Guide workouts to some 5,000 Singaporean enthusiasts.  And then I breakfasted, then walked around this luxury hotel’s main floor area. Modern-chic, in general hotel terms rather than merely culinary, should always have at least a hint of locale, a sense of place.  Here, a residents’ lounge leading off the lobby gives people an alternative to sitting in the bar.  As well as the elegance of its overall colouring and profusion of orchids, there are shutters, reminders of Old Singapore.  Yes, it is all very soothing. AND NOW SEE FIRST, MY ROOM, AND THEN PART OF THE SEMI-BUFFET