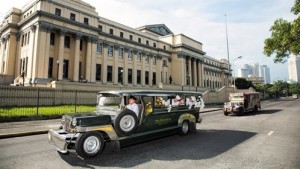 It is still October, and there is still a lot of pink – for breast cancer awareness – to run. But let us take a little colour breather, says the gal. Manila‘s transport is among the world’s worst but it would be even more dire if the city did not have thousands of jeepneys. Climb, and off, wherever. They originated from U.S. military jeeps left behind after World War II and their name might be a combination of ‘jeep’ and ‘knee’, because passengers sit so close to each other, their knees touch. Each jeepney is unique, usually exuberantly multi-coloured kitsch on a par with Flinders Lane‘s graffiti in Melbourne, and the ancient cruisers that serve as taxis in Monrovia, Liberia. The Peninsula luxury hotel in Manila had yet another stroke of genius, and painted up a jeepney, simply, in Peninsula green of course. 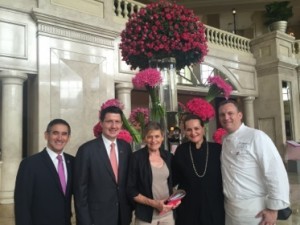 Next year the hotel will have its own, permanent, jeepney, not only single-colour green but customised, by Rolls-Royce, with air-conditioning, a minibar and WiFi. This is part of the hotel’s 40th birthday celebrations, which will include a magnificent gala to pull back as many former managers as possible. Half a dozen of the 493-room hotel’s 650 team have been here since the start, too. Peninsula is one happy family, led for the next two weeks by GM Sonja Vodusek (on November 14th, 2015, she takes over from Malcolm Thompson as GM of The Peninsula Tokyo). She is a gutsy Australian, from farming country in Victoria and no, she did not want to run an abattoir for the rest of her life. She will be leaving a great team behind here – over dinner with the German #2, Yves Thoma, I had a detailed introduction to elevator management, as that is what he had done his MBA on. 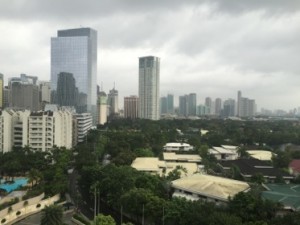 The Peninsula Manila opened 1976 for an International Monetary Fund IMF conference. Its magnificent two-floor lobby, with eight full-size palm trees reconstituted, like Lenin in Red Square, to last forever, and overhead, now, there is a 12-foot sunburst by Napoleon Abueva. There is live music wafting down from the upper level and at all times Old Society gathers for tea or something stronger in the lower level (is it true that Mrs Marcos still calls this her second home?). Suite 1104 became my first home, at least temporarily. It was comfortable luxury, with a nice view down to the oasis that is the pool, although now no-one was swimming because of the rain, albeit now only a tropical storm rather than a typhoon. 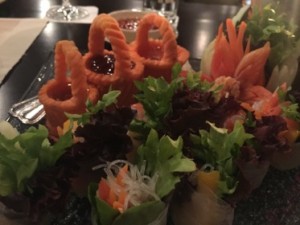 Since my last visit to Manila so much has happened. New luxury hotels have popped up, especially in the integrated resort, or casino, category. I am told that, encouraged by the growing wealth of the middle class here, many who have been working overseas are returning – to their friends, to retail, clubs and restaurants. Years ago the food seemed to be mostly heavy pork dishes: this time I thought I might turn into a seabass. And the finesse in food presentation now is noticeable (see how lovely the starter rice paper rolls with vegetables look – Chef Mike Wehrle is now in charge of the massive dining operations here at the hotel). Now they, whoever ‘they’ are, need to do something about infrastructure. The airport is only 5.5 miles away from The Peninsula Manila but, depending on day and weather and time, it can take over three hours to snail-crawl your way there, and once you have arrived the fact there is only one runway means many delays.