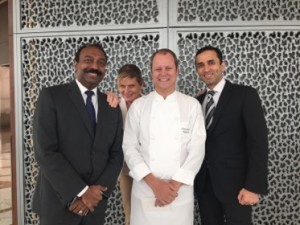 Well what a line up of super young people running one of Malaysia‘s top luxury hotels – and the boss is away, at a meeting in Orlando, with Mickey and others, which leaves his deputies in charge. So here they are, at Grand Hyatt Kuala Lumpur, left to right, the food guy, Suresh Govindasamy;  the kitchen guy, Tommy Franssila, and the sales and marketing guy, Parveen Kumar. They were in charge of the gal and their welcome was faultless (they also made sure she got off the premises, later, waving until the car was truly out of sight). And then presumably they turned around and supervised plans for the hundreds-or-more who would be arriving shortly, for Iftar, the breaking of the Ramadan fast, a slap-up meal that keeps them going a bit longer. 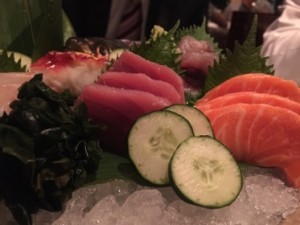 We had a somewhat more subdued dinner, up on THIRTY8, so-called as it is on the 38th floor, down 54 glasssteps from the lobby, which somewhat confusingly is on the top, 39th, floor of the hotel. The building is a square, with slightly rounded corners, and restaurant THIRTY8 literally goes all the way round the square, with the elevator block in the middle. I enjoyed a glass of Cheval – no not Blanc – but Cheval Noir, St Emilion 2013, and decided what to have. Best sellers on Tommy Franssila’s menu are beetroot soup, lobster and Australian wagyu but I went for sashimi, which put me on to a cucumber high. 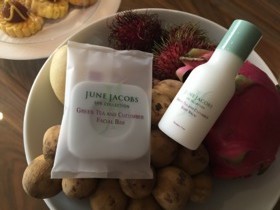 Yes, see how the sashimi is decorated. Tommy Franssila is Swedish, and he believes strongly in only serving local and sustainable seafood. The challenge, apparently, is that during end-of-year monsoons local fishermen do not want to go out fishing so prices can double, and he has to absorb those costs. Back up in my room (lucky me, one of the four corner suites on each floor so, at 2,500 sq ft total, masses of space and great views down into the KLCC park), back up there I had more cucumzania. The toiletries, the soap, are all June Jacobs cucumber flavour. I think of Dame Maggie Smith in Gosford Park, having her breakfast tray brought to her bed. Among other goodies were two cucumber slices, on a porcelain plate, one slice to go on each eye to take away the wrinkles, or so superstition had it!

I mentioned earlier how I look down at KLCC park here, from my room. Were I here early August 2015 I could look down at the first KL City Grand Prix, a street race going round KLCC. It has been put together by UK event specialists Apex, founded by Clive Bowen, working with temporary street circuit specialists KBR. The 2.5-mile track goes round and round this area. Those lucky enough to be staying in this luxury hotel August 7-9, 2015, are therefore in for a very special treat – and, ladies, worth getting some cucumber slices ahead of time, to make sure you look your best during those days. I am sure that lots of Tommy Franssila’s delicious dishes will help too (and of course you could always put some cucumber slices in a good old-fashioned G&T).