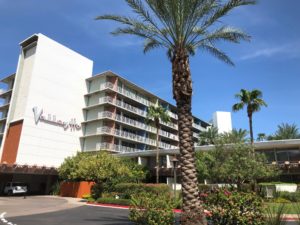 The new tour behind the 1956 original

The City of Scottsdale must surely be one of the most successful in Arizona – latest figures, which are for 2016, show hotel occupancy at 67.7%, and the bed tax that year brought in over $125 million (the largest of the city’s many luxury hotels is Fairmont Scottsdale Princess, with 750 rooms). The gal needed to go back, after an inexcusable absence of 12 years. Last time in town, the charmingly-retro Valley Ho hotel was a two-floor structure, finished 1956 for then-owners Robert and Evelyn Foehl.  Now, current owners MSR Properties have added a seven floor tower, to give a total of 241 rooms, plus 49 units that are a combination of owned and rented. 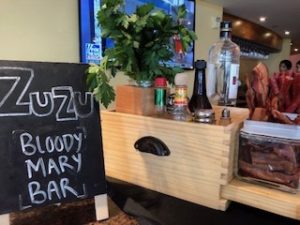 This is absolutely the hangout for 25-40 year olds.  High-achieving professionals living just a few blocks away move in for weekend staycations: the historic 60-year old pool, around which Bing Crosby, Zsa Zsa Gabor and many other big names frolicked in the past, is a massive year-round draw.  I sat near the pool for an outdoor breakfast (it was too hot later in the day to be in the open air).  I was in room 616, a new-tower duplex suite with two balconies on each floor: I had a fullscale Cuisinart-Viking kitchen, bathrooms with two showers and, what bliss, an easy-function Maytag laundry, with detergent provided.  This was just bliss for any regular traveller who, like me, only stays for one night per place (see the video below). 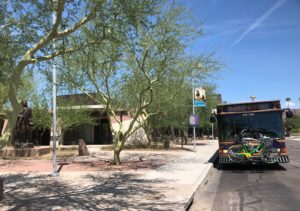 Free shuttle bus outside the museum

Scottsdale is obviously spending some of its bed-tax money on sensible tourist enhancements.  One is a hop-on, hop-off trolley bus, running day and evening long, and absolutely free (one stop is right outside Valley Ho). Literally five minutes’ walk from the hotel, incidentally, is a three-year old Smithsonian affiliate, the Scottsdale Museum of the West, a stunning $11.4 million structure by architect Studio MA. Inside are various collections, including the world’s biggest array of Wild West saddles. One of the first things you see when you go in is the giant painting, shown above, by Maynard Dixon, 1875-1946 – it shows Kit Carson who died in 1868, after a sort of Count of Monte Cristo life, in which he had been able to father ten children, admittedly by three wives. 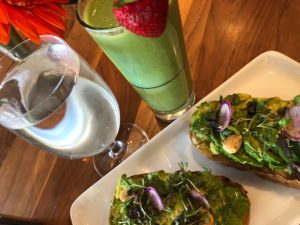 This is a fun luxury hotel with so much around it (you are never short of bijou art galleries and jewelry boutiques, or Southwest restaurants).  I ate so well in the unforgettable hotel’s all-day Café Zuzu, called after the wife of the co-founder of MSR Properties’ forefather, Rusty Lyon.  Dinner, with the hotel’s Kristin Heggli, ended with this month’s show-shopper shake, topped with Oreo cookies (all September, says chef Tony Huerta, the show-shopper, always a social media hit, will be the ultimate banana split. Before leaving, it was weekend brunch time.  I eschewed the make your own Bloody Mary and mimosa bar – see the video below – for more simple fare. Honestly, avocado toasts with EVOO quickly-pressed olive oil and round Marcona almonds, from Spain, made a healthy, if calorific, marriage with a green monster (banana, cardomom, honey, kale, mango, and soya milk). I did have time to work out, too, in the 24/7 Precor gym, with all-wall windows looking down to that pool. Next visit, by the way, I shall book ahead for Valley Ho’s Insider Mid-Century Tour of Scottsdale, showcasing incredible buildings by Frank Lloyd Wright and other notable Valley architects. Tour guide is Ace Bailey – available full-day or half-day, two to 10 participants. NOW SEE VIDEOS OF MY DUPLEX SUITE, AND THE MAIN POOL