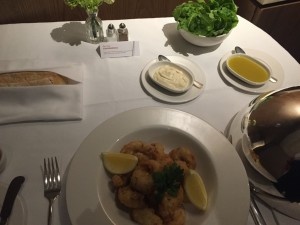 Flying high above the clouds is still a thrill, even to the always-travelling gal. It is sad to think that until about 150 years ago our ancestors never had the chance to see such a view. In case you are interested, these are Brazilian clouds, and it is time for a brief return to São Paulo. Driver Winston, from Grand Hyatt São Paulo, is there at the gate. He becomes great friends with those he is driving, even though he only speaks Portuguese (but of course he might speak Japanese perhaps?). Smiles become a language. Arriving late at night, there are more smiles, from Alexandra Bueno, who has waited up to say welcome.  Frankly, after a three-hour time change from Peru, a midnight snack is needed. It arrives quickly, and stylishly, and is just what the doctor ordered. 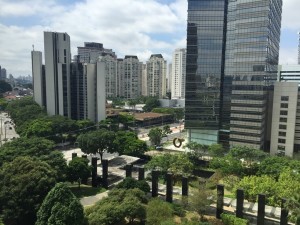 In the morning I pull back the full-length, full-wall curtains of corner suite 702, and wish yet again that every designer would, as here, put in easy-pull curtains. Now I can see out. I look across to Nestlé’s headquarters Brazil, and to the global base of media giant Grupo Globo, the second-largest commercial television network in annual sales worldwide. This is the Jardim Botânico area of São Paulo – Globo’s main production studios are at Jacarepaguá, and in honour of Globo’s founder, the late Roberto Marinho, who came from Rio de Janeiro, that city’s private jet airport, near the stunning new Grand Hyatt Rio de Janeiro, is named Jacarepaguá. Grand Hyatt São Paulo, by the way, is now a mature 14 year-old, and like all teenagers the 466-room beauty needs a bit of tidying up. The lobby is currently closed, for an update, and you check-in at the spa, on the second floor. It is right next to the gym, which is 24/7. 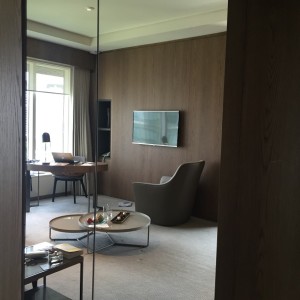 The suite has recently been refreshed

Suite 702 has had its update, supervised by local designer Lilian Vexter. It is simple and clean-cut, as the photo shows. The main layout has not changed. The bathroom and closet are a walkway between living area and bedroom, so you can go round and round. And the bed, by the way, is one of the most comfortable I remember – it has a Simmons mattress. Having a whole range of different local soaps, from Granado, is a nice touch. I am told about the importance of age-15 in a Brazilian girl‘s life. The hotel has a ‘best-friend package’, which comes with two bedrooms, one for parents, the other for the 15-year old and her best friend (these two have named robes and pink pyjamas, to take home, pink Granado Celêndula soap, and teenage massages). 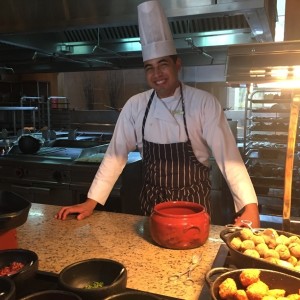 A chef gets ready for weekend brunch

I have a jar of the popular Brazilian brigadeiro (chocolate fudge ball) cookies. Up in the 20th floor Club Lounge breakfast includes a hot chafing dish of pão de quejo, one-bite cheese rolls that locals seem to munch day long. It seems I am eating during my entire but too-short stay here at this extremely agreeable luxury hotel. I have an early brunch and look at the beans and rice, and other local dishes, that will attract hordes of locals shortly. But Alexandra Bueno is on duty – again – to see me off. Winston awaits and, with big smiles on both sides, we are off, back to the airport.