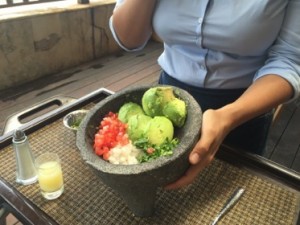 There are few more idyllic spots for seriously worthwhile – and enjoyable – business meetings than the three luxury resorts at Mayakoba, Riviera Maya. One day the gal was lunching with Lucy Clifton, who does the PR for ILTM Americas, the reason why so many of the world’s Great and Good had descended on Fairmont Mayakoba, and its siblings, Banyan Tree and Rosewood. We were doing salads that day but decided to order a guacamole to share, first. Oh wow, this dish will have to be an annual date. The ingredients, in a traditional black stone porringer, are presented, and mashed, and flavouring added to order. 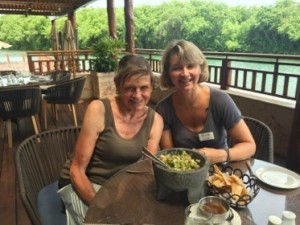 Lucy Clifton and the finished product

And then we ate, and no, we were not into margaritas or anything tequila that day. I now know, by the way, that top tequilas are fermented using only blue agave, found primarily around the city of Tequila, Jalisco, 40 miles northwest of Guadalajara. Fascinating how it is enjoying celebrity status – Justin Timberlake co-owns Sauza 901, Sean Combs/P. Diddy owns, with Diageo, DeLeón, and the husbands of fashionista human rights lawyer Amal Clooney and Cindy Crawford (aka George Clooney and Rande Gerber) started Casamigos, which in two years has apparently become the US’ fastest-growing Tequila. 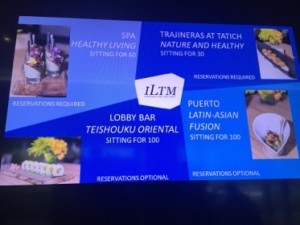 Fairmont Mayakoba has the all-day La Laguna, where we had our guacamole, plus, on the beach, Brisas, and in the main building, El Puerto, site of the welcoming party on Monday. During ILTM Americas they were actually able to offer no fewer than nine lunch venues, including healthy dining at tables set up right in the spa reception, and its courtyard outside – another alternative was sushi in the lobby and yes, this one was particularly popular. You could also lunch on one of the boats. The hotel also runs a El Cafecito, one of three intimate restaurant sat Mayakoba‘s just-opened El Pueblito Village, a Mexican village that looks established through the ages. 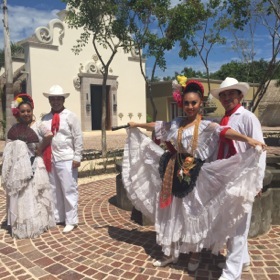 The village is another of the brilliant ideas of the brains behind the entire Mayakoba complex. As well as a cobbled village square surrounded by restaurants and an art gallery, there is a consecrated church, where Father Hubert Reiner conducts mass every Sunday, at noon – it also holds 104, for weddings. Undoubtedly the village, though perhaps not the church, will be buzzing during the forthcoming PGA OHL Classic, November 9-15, 2015. 132 golfers are attracted by $6.2 million prize money, but although they will love the village, and Mayakoba‘s three luxury hotels, it is safe to say they will not have as much worthwhile fun as those of us at ILTM Americas.