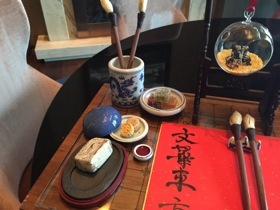 It is quite a feat to produce an edible artwork that makes even the most seasoned traveller say wow. The gal was assured that everything here, at Mandarin Oriental Pudong Shanghai, was good not only for the eye but the taste buds but it was just so lovely it would have been sacrilege to have broken the look. There was, any way, too much to do. First, it was a fine day, which meant an invitation to join local families and some kite flyers enjoying the scenery outside, along Binjiang Avenue skirting the river in this part of Pudong, known as Harbour City. 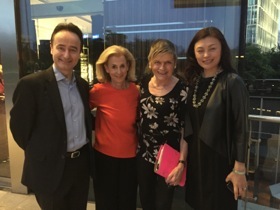 And then I met up with Pierre Barthès, who runs this lovely 362-room hotel, and his wife Vivian Xiwen Sun Barthès, and a new friend Lilian Israel, who was to keep us entertained all evening – pair a French accent with lots of balletic arm movements and descriptions of the essential value of gastronomy to successful modern lifestyle and you get an introduction to why she is so adorable. She runs LISPA Consulting, a Paris-based operation bringing even more wellness into food offerings. Her bible, apparently, is Marcel Proust’s The Cook, promoting the sensuality of eating. 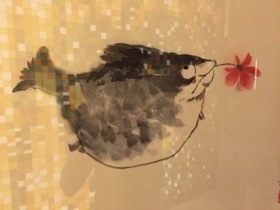 But, I do admit, I was happier to be dining here, at Fifty 8° Grill by Richard Ekkebus, than at Lilian’s home, where she claims to live off home-made vegetable soup. Instead, tonight, dinner started with a tasting of chef Jason Oakley’s appetizers, a seared tuna Niçoise, gravadlax with crème fraîche, tabbouleh, and iceberg lettuce with charred chicken, and so on and so forth. Then I had a ribeye on a marble slab – oh the sensuality of eating – and then we walked a few yards to a display of fish art by a Chengdu lady called Da Cai. It is called ‘Fish, you are not a fish’. Don’t ask why. 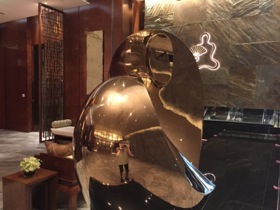 Alluring entrance to the spa

The 25-floor hotel is joined to a 22-floor block of residences by public areas that are actually mostly one floor down, but the large ‘skylight’ makes you think that, down there, you are at ground level. This is an Arquitectonica concept, from the architects who at one time were going to turn their local Miami Herald building into a design shape worthy of the next century. Here, down at that lower level, you have not only restaurants but also the spa and a 24/7 gym (latest Technogym and kinesis) that overlooks the pool, with lots of white sculptures. 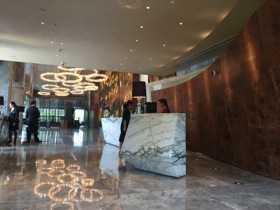 There are over 4,000 pieces of art around the hotel, one of which takes up an awful lot of room – this is a highly masculine all-wall ceramic mosaic in the outer lobby, oranges and browns, apparently a forest, or so says artist Miao Tong. The rear part of this luxury hotel’s lobby, by contrast, is soothing calm, like the bedrooms. I was actually in a duplex, the 2515 Oriental Suite, which gave me lots of running, up 18 wood stairs from the salon, with its edible artwork, to the bedroom. I also had my own gym thoughtfully provided up there. I could have pounded the treadmill instead of going along Binjiang Avenue…