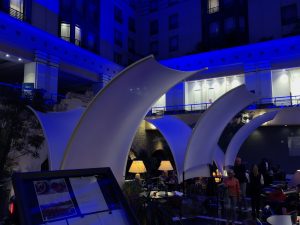 The atrium at night

Some, when thinking of Brussels, immediately conjure up images of moules, frites and beer – or such cultural wonders as Grand Place (above). And Brussels is of course the headquarters of NATO, and of the EU. In case anyone thought otherwise, this last fact impedes rather than helps the luxury hotel sector. Per diems for all those bureaucrats are kept low by tax-payer vigilance, which means hotel rates are as little as a third of those in Paris, under two hours’ train-ride away.   The gal was visiting a doyenne, the 1990-vintage Radisson Blu Royal, which will, chrysalis-like, evolve into a Radisson Collection luxury hotel from April 2020. It will keep its magnificent seven-floor open atrium, illuminated in blue at night. 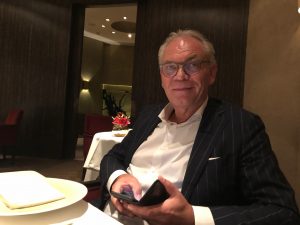 Run by Brussels-born GM Gaston Gellens, who also heads Belgium for Radisson Hotel Group, the 282-room hotel attracts lots of groups, especially in the pharma sector. Others are lured to the hotel by its culinary reputation. The Michelin two-star Sea Grill, only reached via the hotel’s main atrium lobby, is leased out to Belgium’s renowned seafood chef, Yves Mattagne.  The restaurant is full every night (tip – if you want to eat there at short notice, go for lunch). We, fortunately, had a dinner reservation, and the combined theatre of play (=food) and production (=service) was 5/5 for a two-star, so much more thoughtfully empathetic than many a three-star. 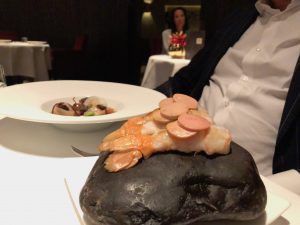 Langoustine waiting to be flamed

I started with a glass of Rully – no vintage or winemaker divulged in this Maison Mattagne. Food-wise, after a couple of anonymous-but-delicious edible pointillist amuses, I began with burrata di Andria with wisps of onions, asparagus hairs, whole but tiny green peas and smoked oil. While eating, I watched presentation of the signature appetizer. Three langoustines arrived on a black stone and were blow-torched tableside. Watch the video below to see this dramatic happening. We went on to more special effects. A large silver-covered trolley was wheeled up, and opened to reveal a 50-cm long brick of salt. 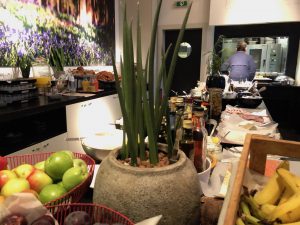 Conversation around us, which had already momentarily paused for the blow-torching, then stopped, for the second time. A server cracked open the one-use salt to reveal a whole seabass, deftly portioned and served with assorted mushroom and a tray of olive oils of the world.  This theatre, by the way, gave way the following morning to another production, in the form of an extremely clever buffet breakfast. Seat yourself, at high communal tables or normal height settings for two or four. You can see everything, there are waffles if you want locale and a Miss Africa in a chic dark navy suit and Afro hairstyle, not a hint of whites, cooked a perfect omelette with 100% aplomb. And then, sadly, my driver awaited. SEE ROOM 721 AND THEN WATCH THE BLOW-TORCHING