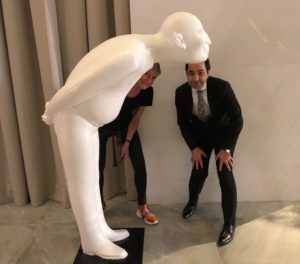 Arriving anywhere in China, one of the first things the gal likes to do is practise a spot of tai chi – no wonder this is increasingly considered a great wellness aid, as the stretching and breathing does seem to open up the body, so to speak.  But today there was no time for such exercise, as Sadettin, usually known as Sade, Kaya was waiting for dinner at The Peninsula Beijing.  He has already had such a fascinating professional career – a would-be pilot back in Turkey who diverted years ago to work at Grand Hyatt Istanbul, he is now Manager at this luxury Beijing hotel. 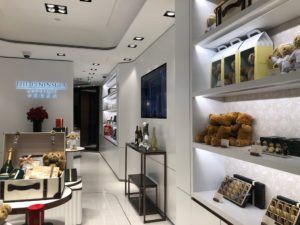 The Peninsula’s own boutique

Peninsula Beijing shows how considerable design spend and the ability to be bold can elevate a product.   This was always a stately hotel but now it is totally striking, with three floors of super-luxury retail that includes a recently opened Jenny Packham, right next to the hotel’s own boutique.  Henry Leung’s interiors everywhere are sleek and mostly understand, with just one wall of a suite having a floral overlay, a hint of the metallic floribunda that gently dance over some walls in The Peninsula Hong Kong rooms. 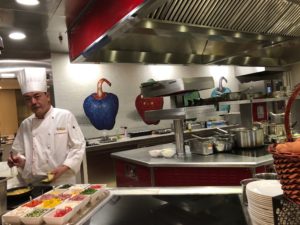 Looking into the breakfast kitchen

And boldness? Well, what used to be a sideways-on 30-step staircase leading from the lobby floor up to the next level is now a True Statement staircase, straight on as you go into the hotel.  It is pretty bold, too, to take away front desk. There are various small tables and chic and immaculately groomed agents seem to appear by magic whenever one is needed.  It is also bold to continue having your main restaurant down 30 steps, or escalator or elevator, to a lower level, though having such good retail down there helps – as does the gorgeous restaurant Jing.  Reach it through an elegant sitting area and then choose from a variety of niche ambiences, for more, or less, privacy. At breakfast a separate room is opened, for an enormous and superb buffet – you can see through to the kitchen, and talk directly to your egg chef. 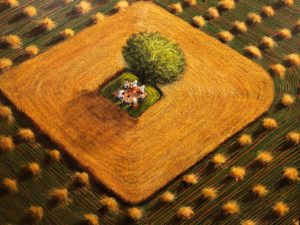 Being Peninsula, of course there is art everywhere. I was lucky enough to coincide with a temporary exhibition of works by two Turkish artists, displayed in the gallery leading to the LifeFitness gym, which is 24/7.  I especially liked the piece shown here, ‘Happy family’, by Yalçin Gökçeba, who for a couple of decades was an Ankara-based cameraman with Turkish Radio Television.  But then I like the permanent art and sculpture, including, in the lobby, a lifesize bronze of the sitting man (artist Zhang Du), and the leaning-man sculptures flanking the door (Gao Xiao Wu). And being this company and this hotel, of course there were lots of thoughtful touches, things like lens cleaning cloths, and hand sanitizers in the bathroom (where the tai chi sculpture, above, sits) and, for those going to the Great Wall, a guide book beforehand, and a muscle reliever afterwards.  More and more, it seems, what gives a hotel the luxury designation is all those details, with service to match. NOW SEE THE LOBBY, AND SUITE 900