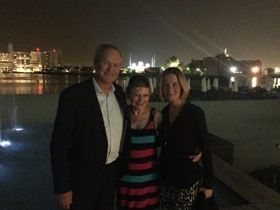 Nils and Lotta Axing, with the Mosque behind

Abu Dhabi’s Sheikh Zayed Grand Mosque is, well, amazing. It covers over 30 acres, and, starting from 1996, took a decade to build. Over 3,000 worked on it, under the guidance of the Italian firm Impregilo – it has 82 domes of seven different heights and four minarets, each 351 feet high. It holds over 40,000, and cost $545 million. The gal’s first view of the mosque on this Emirate trip was from the luxury Fairmont Bab Al Bahr hotel. After dinner with Nils and Lotta Axing at the Marco Pierre White Steakhouse & Grill, we went out for the view. 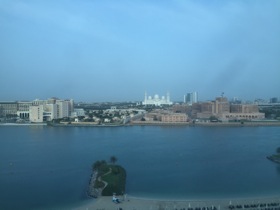 The Mosque in the morning…

Dinner, by the way, was really fun – loved the beef-and-burrata starter, which did turn out to be carpaccio topped by burrata and the tiniest organic tomatoes. Nils had Yasa caviar, served on a glass palate, its indentations holding egg white, egg yolk and slivers of onion, plus tiny blini. Yasa sturgeon caviar is from Emirates AquaTech, formerly known as the Royal Caviar Company, in Mussafah, and with the rise in popularity of caviar, it should do very well (it is marketed internationally by the Spanish firm Garamond International). After an excellent night’s sleep, I looked out of the windows of 817, a Mosque-facing Club suite, and the Mosque looked completely different. 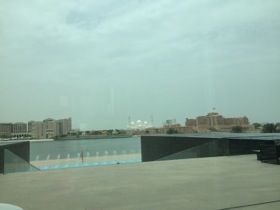 It has much in common with the Taj Mahal, subtly changing its identify from dawn to dusk. Every half hour the Mosque takes on a different hue. Were there time I would take the complimentary shuttle that crosses the waterway here, from the Fairmont and its neighbouring Shangri-La, to the Ritz-Carlton and the Mosque. But time there is not, today. I breakfasted outside, on the terrace of CuiSine, next to local families enjoying a weekend break. As always it is fascinating to see what the locals eat to start the day: here there was lots of taking of khameer, Arab yeast bread with sesame, and chebab, pancake with cadomom, fennel and saffron. There was also a commendable wellness breakfast, with juice, carved fruits, organic fruit yoghurt, and an asparagus egg-white omelette with grilled tomato and mushrooms. 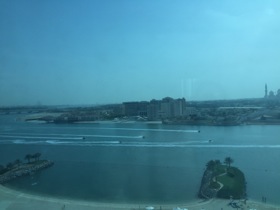 The ghastly, noisy and dangerous jetskis are a tourist put-off

I love this place for its dining, its weekend brunch with unlimited Laurent-Perrier, the Wagyu 5+ in Marco Pierre White (next time, as well as the Yasa caviar, I will try a gourmet burger, grilled Wagyu, beef bacon, gruyère, parmesan, stilton, truffle aioli, mushroom and a bucket of chips..). Indeed I love everything about this luxury hotel and its people apart from the appalling noise from alien jetskis who, despite endless protests, disturb the peace of all those at the hotels ‘between the bridges’, as this area is called.