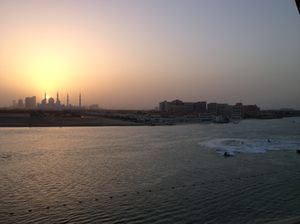 The symbol of Abu Dhabi, the Sheikh Zayed Grand Mosque, the largest in the UAE, is the eighth largest in the world –total area the size of five football pitches.  Any luxury hotel down by the Creek is lucky as guests have amazing views of the Mosque at all times (also amazing are the ghastly, thoughtless jet-skiers, banned from other areas of this Emirate and the gal strongly believes they should be banned from here, too, before someone gets killed). 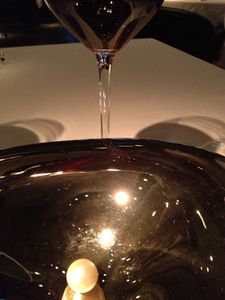 A pearl-shell dish, with a pearl inside, at the restaurant

Over three thousand worked to create this Mosque, with its 82 domes and four minarets.  Total cost is thought to have been $545 million but who cares?  HH Sheikh Zayed bin Sultan Al Nahyan is buried here, now.  On Fridays, up to 40,000 come here to pray, on what is said to be the word’s largest carpet, 6,570 sq ft in all, made by over 1,200 Iranian carpet knotters.  Oh yes, Swarovski got into the act too.  Millions of their crystals are in the mosque’s seven giant chandeliers, which come from Germany. 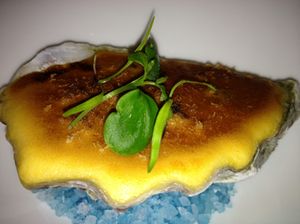 Talking of beautiful things, my first night back in Abu Dhabi was dinner at Pearls & Caviar, next to the villas that are part of The Shangri-La Hotel, Qaryat Al Beri, which means ‘village by the guard-tower crossing to Abu Dhabi Island’.  Pearls & Caviar is a separate two-floor building cantilevered over the creek.  Arrive at your table and your place is marked by an eight-inch wide silver-black ‘pearl shell’ holding a cherry-sized pearl.  The shell is in fact a black silver-topped white china bowl. The pearl is pierced and I shall hang mine on a thread to replace my gold champagne top, stolen a couple of years ago. 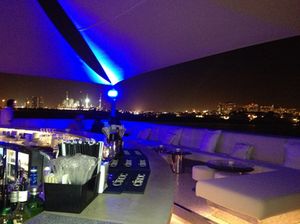 After dining, up to the rooftop night club

The food, as you would expect, is very elegant.  Before we started properly, the chef, Cyril Calmet, sent out another shell, this time a real one filled with a single oyster Rockefeller, created 1899 by Jules Alciatore, son of Antoine Alciatore, the New Yorker who had opened the famous Antoine’s restaurant in New Orleans in 1840. Alciatore Jr called his dish for John D. Rockefeller because the sauce was as rich as JDR was, at the time. My meal after that was less rich, namely a palette with little blobs of Sterling Farm beetroot and goat cheese, and walnut butter and pickled Shimej mushrooms, followed by Norwegian halibut. 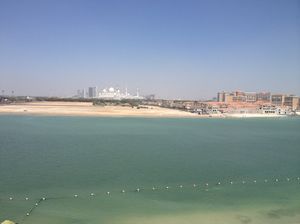 Looking across the Creek to the Ritz-Carlton

But this is also something of a wild place.  Head to the upper floor, above Pearls & Caviar, and you find a day-glo bar, with streaks of fuchsia and streaks of gentian light, and lots of happy people enjoying themselves.  By day this resort, for that is what this 214-room hotel is, right on the water’s edge, is a haven for kids, who love splashing in and out of the water.  By dark, adults love it just as much (though the locals and expats here in Abu Dhabi seem to be more controlled, especially at weekends, than some of their Dubai neighbours). 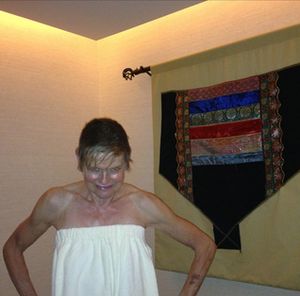 Ready for the spa

In the morning, I pulled back the curtains and looked across the Canal to – the Mosque. What a lovely and peaceful start to the day and, at that hour, not a single jet-ski in sight. While working out in the gym, though I did think that every luxury hotel should give a jet-ski count.  Are they likely to be a nuisance?  And what can be done to make the authorities take note? But no time to take action now.  I eschewed the offered buggy and took a ten-minute garden walk along the banks of the hotel’s own mini-canal, and over a wood bridge that would do Venice proud, to have a half hour of relaxation in the Chi spa in the hotel’s own, and very splendid, soukh shopping mall.  Somehow one does not look either elegant or like the luxury traveller one hopes to be when going into a spa…