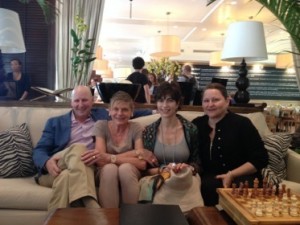 The gal had been longing to meet the Plutzik family ever since her first visit to the unique-luxury The Betsy South Beach hotel. Time for a recap. In 2009 philanthropists Jonathan Plutzik and Lesley Goldwasser opened the 62-room hotel, right on Ocean Drive at 14th Street – technically, they re-opened what South Beach’s iconic architect L. Murray Dixon had designed in 1942 as the Betsy Ross. The pair thought of The Betsy South Beach as the natural platform for their many arts and cultural events, which are coordinated by Jonathan Plutzik’s sister, Deborah Plutzik-Briggs. 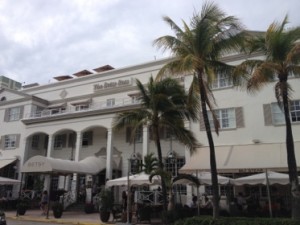 Looking across at what is now The Betsy, South Beach

There seems to be a continual programme of exciting events, with authors in residence, and poetry readings. Now is The Betsy South Beach’s annual Season of Gratitude. Running from Veterans’ Day through Valentine’s Day, this is the time of giving back. Next on The Betsy South Beach annual calendar is Miami’s poetry festival, O, Miami, in April. Miami’s annual Alper JCC Berrin Family Jewish Book Festival  comes in November, followed by the early-December Art Basel Miami (during the 2014 Art Basel Miami, The Betsy South Beach hosted three exhibitions, by Howard Ehrenfeld, Balazs Gardi and Rene Trevino). 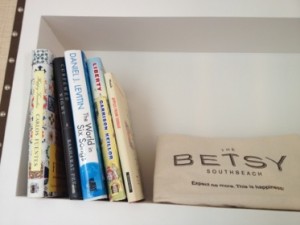 Book bag, and one of the bookshelves, in suite 223

There are round-the-calendar partnerships, with Zara’s Center for Youth, and with the John Lennon Educational Tour Bus, which promotes arts in the community. Deborah Plutzik-Briggs works closely with local libraries and if an author in exile is in town, events might be held in a community venue, or here in the hotel. Another strong partnership is with Books & Books, whose founder Mitchell Kaplan makes sure that books in the hotel’s public spaces and in all bedrooms are chosen to be read rather than merely looking good. One of the volumes in corner suite 223, a 650 sq ft beauty facing across Ocean Drive to grass and the beach, is Apples from Shisnar, poems by Pulitzer Prize nominee Hyam Plutzik, father of the talented Jonathan and Deborah. 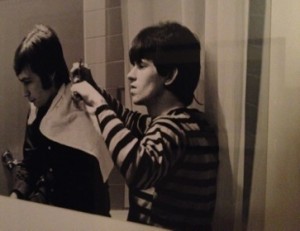 Take books of your choice up to the loungers on the hotel’s rooftop, next to its outdoor spa. Corridors and staircases of the five-floor luxury hotel are, by the way, another cultural class, in art and social and music history – the photo shown is a pair of Rolling Stones, namely Charlie Watts having his hair cut by Keith Richards, in 1965. The music association continues. Last month The Betsy organised an A Capella festival, for unaccompanied choirs. Next month, it joins Mercedes-Benz and Steinway in sponsoring Miami Beach Jazz, with Monty Alexander, Federico Britos, Giacomo Gates (January 7th, 2015), Aria Hendricks (January 8th, 2015), Bucky Pizarelli and Ed Laub, and Rufus Reid … And in the hotel’s Salon, on January 8th, 2015, author Neil Baldwin asks ‘who was Martha Graham?”.