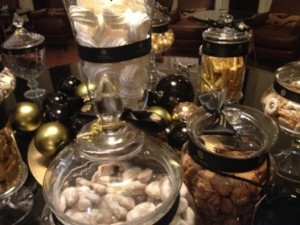 A table of bon-bons awaits

What a blissful change to go into the stylish Hotel Bristol Vienna luxury hotel and not find it decked with holly, or at least the modern version thereof. No, says the gal, here Gerald Krischek, who runs the hotel, has put collections of capped glass bowls around for anyone to take a bite of the bon-bon that most appeals. Frankly, anything that is different stands out. Who wants another tree, sort of thing.. 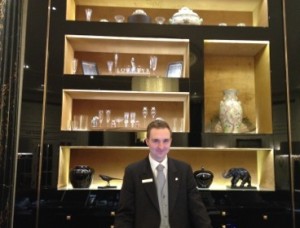 The hotel’s interiors have been re-done, top to bottom, by Pierre Yves Rochon. Think of the versatility of that guy. In London about five years ago he was working simultaneously on the re-build of Four Seasons Park Lane and on The Savoy. He is like a medical consultant who can concentrate on arms and legs at the same time. Here, he has put a stylish curved reception desk into an oval space. Behind the desk are well-illuminated shelves of Lobmeyr glass. The owners wanted the long-established Korso restaurant behind to be banqueting. 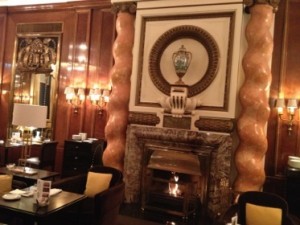 No way, suggested Mr R. First, the arriving guest should be able to look, from Kärntner Ring, through the main lobby, the reception lobby and then a restaurant to what will be a Winter Garden in the pedestrian passage behind. And if the Bristol thought anyone would be enticed upstairs to the existing mezzanine restaurant, they were wrong. So he won. The former upstairs restaurant is now magnificent suites, and downstairs is the sensational all-day Bristol Lounge, with plush carpeting, a real log fire – the only one in a Vienna hotel – and, down each side, six smoky glass mirrors so if you are facing the wall, you see, reflected, what is going on behind you. 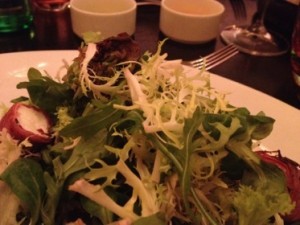 That plush carpeting means you cannot, perhaps annoyingly, hear any of the fascinating conversations at neighbouring tables. Music is soft soul: as Gerald Krischek, GM of this luxury hotel, says, after a performance at the Opera House, a mere hundred yards away, taped classical would be anathema. Already, Vienna’s A-listers use this as their regular meeting place, coming, say, for a Bristol salad with bacon-wrapped soft cheese, followed by Wienerschnitzel, and Schlumberger Privat Keller 2011, Cabernet Sauvignon and Merlot