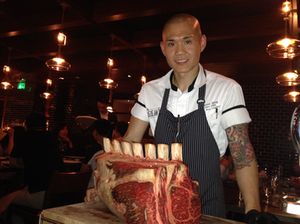 Vincent Wong is a meat chef, and he operates at Shanghai’s newest luxury hotel, Jing An Shangri-La, West Shanghai. You enter its 1515 West steak restaurant through a corridor shaped like upturned boat hulls. Turn right, and past the glass-walled ageing cabinet, where you see whole standing ribs, dated. They come from Stanbroke Ranch in Queensland, and are, the gal was told, dry-aged here for 45 days at a temperature between two and five degrees Centigrade, with humidity between 75 and 85 percent. 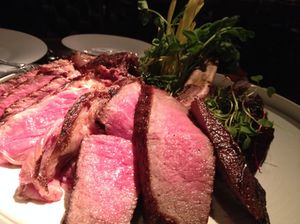 Ready to eat (for two)

Sit down at one of the tables in the stunning restaurant, designed by New York steakhouse specialists Avroko, and within minutes Vincent Wong will be round with his trolley. Then comes the menu. Want the Bone-in Rib Eye? It is charged per bone. That is what we had, of course. Our slab, to be shared, was presented uncooked, and then it was cooked on a gas-fuelled grill in the open kitchen. It then arrived, as shown, already portioned, on a bed of roast beets and mushroom bits, and spinach. A box of six Laguiole knives was presented. Choose your handle. I thought of ‘my’ knife, in the cabinet at The Rib Room in Dubai. 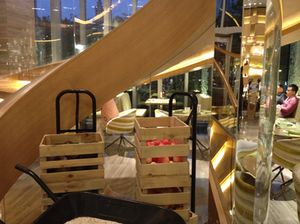 Section of the two-floor Café Liang….

This 508-room hotel towers above the Jing An area of West Shanghai. It is on the top 28 floors of a 59-floor tower, surrounded by new office and residence blocks, and amazing big-name retail (the Tory Burch store is particularly impressive as it is like a squash court-sized bright orange box). All these other activities produce hungry people, and not surprisingly the hotel’s restaurants all seem to be full, the whole time. The all-day Café Liang, on the ground floor and designed by Super Potato, sensibly has an upper floor that it can, in future, incorporate. 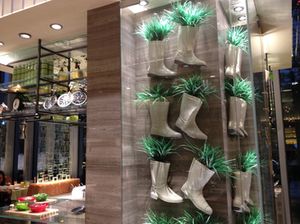 ..which has a display of plant-filled boots

This café is such fun. It has masses of buffet stations, and two revolving wheels, each about four feet across and holding, as segments, 12 different types of ice cream. There is a decorative wall of white boots filled with greenery, which reminds me somewhat of the stacks of plain white china at W Hong Kong, and in Max on One at Jumeirah Frankfurt. Want somewhere else to eat? Head for the hotel’s Summer Palace, a series of André Fu theatres with tassels hanging from the ceilings and a variety of cooking styles. For modern brasserie, walk 50 yards to the Calypso free-standing restaurant, actually run by the hotel (if it’s raining, get there via the three-floor subterranean shopping mall, with metro entrance, under the hotel). 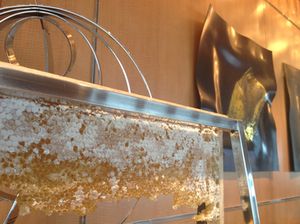 Honeycomb and other art, at breakfast

You can also eat, if you are staying in a Horizon Club room, in the 55th floor lounge, another André Fu design. I love the juxtaposition of the breakfast honeycomb and a sculpture on the wall behind. The art throughout the hotel is cleverly chosen – room 6823, overlooking the Exhibition Centre, had silver-framed abstracts. I had two desks, by the way, which is thoughtful, as some pairs need a desk each, and I also had a full office kit, and the electric towel rail that should be de rigueur in all luxury hotels. One guy was running full tilt for over half an hour in the gym (24/7 and stunning views) when I was there.   His workout clothes would certainly need washing, and drying, afterwards. 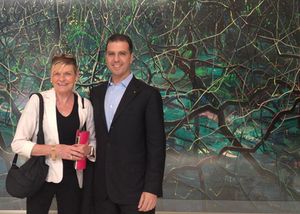 My good friend Kieran Twomey, who runs this luxury hotel, was sadly away during my visit but his number two, an effervescent Roman called Francesco Pantalone, took great care of me. He was even there to make sure I left….