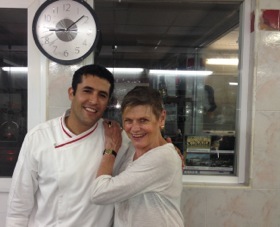 Juan Pablo Loza is a pretty unusual culinarian, the former best-chef in Mexico who moved on from heading the Maccioni family‘s restaurant in Mexico City to his current role, F&B and Executive Chef of Belmond Maroma Resort & Spa, south of Cancun. He was the gal’s minder for her stay back at the hotel, although technically ‘back’ is the wrong word as last time here, a year ago, it was merely ‘Maroma‘. Then Belmond, the brand, appeared out of a genie’s bottle and whoosh, this luxury hotel changed its name. Other things have changed. Because of added variety of dining venues – what you want, wherever, now 85 percent of people staying here dine here. You can even have sushi, and American beef (although 98 percent of all products are Mexican). Try the typical Cantina, a version of a traditional male-only drinking place… 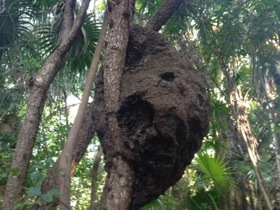 Seen on the jungle walk

Juan and his boss, Federico Echaiz, are always coming up with ideas. For instance… since my last visit there is a new jungle path. I took it, not realising that I was sharing the jungle with at least a score of hungry mosquitoes (red lumps appeared the next day in all the juicy parts of my arms and legs). I wondered about Adelita, the house parrot, who had not greeted me this visit – I learned later she was inside as she tends to make a terrific noise when it rains. I did, on this jungle trek, see about six monkeys, and one enormous ants’ nest, presumably half way up a tree to protect the residents from swamp floods caused by the torrential downpours that are the way of rains in this part of the world. 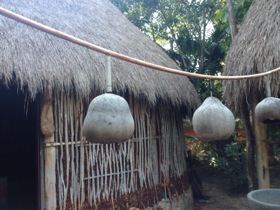 A traditional Mayan house has been built in the gardens

Another idea is a typical Mayan house, built in the hotel gardens by one of the bellboys and his father – next to it is the Maya Temazcal healing hut that was previously right on the beach. Inside the house, beds are on racks about three feet off the earth floor, presumably for the same reason as the raised ants’ nest. Juan can prepare Mayan dinners there, which may well include grasshoppers (chapulíne), Sphenarium that he cooks with garlic, lime juice and salt with an extract of agave worms. In fact tonight we were going to do the regular Friday night barbeque on the beach, with the catch of the day being giant seabass, grilled on zapote wood. Juan has worked for three years to achieve the only accreditation in Mexico from Seafood Watch, organised by Monterey Bay Aquarium: all seafood here is sustainable, and he serves no tuna. 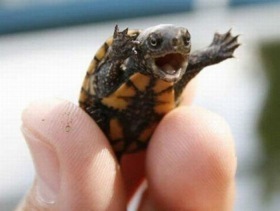 But there was another surprise, this evening at this luxury hotel. It was release-the-turtles special. The little darlings had been born about six hours before. All ages, young and old, we stood behind a line drawn along the beach, about ten feet in from the water. We each took a baby turtle out of a box of sand, leaned down and, at the word GO – no flashes allowed – let’em go. By instinct they headed straight for the water and into the waves. And that was how I met Amazing Annie (she was next to me in line), Annie Fitzsimmons, who got her first job by telling Nancy Novogrod, in charge of Travel+Leisure, that she had identified thousands of hotels she wanted to visit…