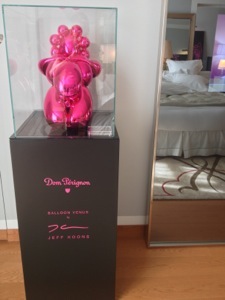 On November 12, 2013, an orange Jeff Koons‘ Balloon Dog sold at Christie’s New York’s Post- War and Contemporary Art Evening Sale for $58.4 million. One night in October 2014, the gal shared a suite at one of the world’s top luxury hotels, Le Royal Monceau Raffles Paris, with a pink Koons balloon. This is part of the LVMH-themed pop-up Dom Pérignon Suite at the 149-room hotel. Rush to book suite 204 if you want to be part of this promotion, which honours the launch of Dom Pérignon 2003 Rosé Paradox, so named as that year saw extraordinary rainfall but produced an outstanding vintage. 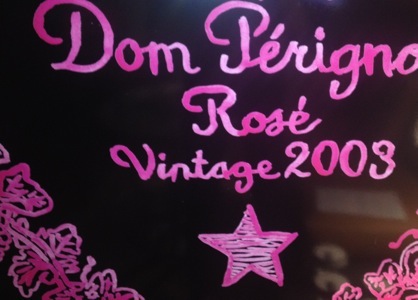 This magenta Balloon Dog is mirror-polished stainless steel with transparent colour coating, and it measures 121 x 143 x 45 inches. It is one of only five produced – the orange one, above, a blue one, a magenta one, a red one and a yellow one. Interestingly, many years ago the Pennsylvania-born artist, now 59, seems to have been influenced in early life by Salvador Dali, whom he visited at the St Regis New York. Koons then went on to become a commodities broker, but that was a short-lived entracte. It is worth researching his life: he and his wife Justine Wheeler have five kids but he was previously married to Italian porn-star-turned politician Ilona Staller, Cicciolina (one son) and there was an earlier child…) 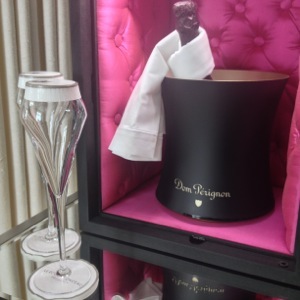 .. and atop the minibar

Dom Pérignon has some clever marketers, who include Arnaud de Saignes.   As he says, this is a wine with strong ageing potential. It spends at least eight years in the cellar before cellarmaster Richard Geoffroy will release it. Then the brand people have to decide how best exclusively to promote it. They work with art ambassadors, like Jeff Koons. Another artist is Todd Selby, a photographer, director, author and illustrator who has been working on his The Selby online project – a portfolio of his friends – since 2008. Here, a large placard rests against one wall of suite 204’s salon. 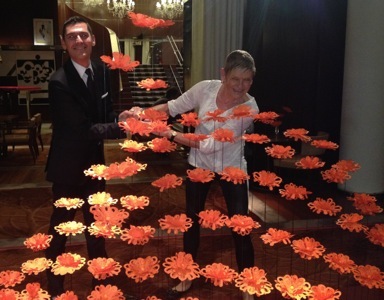 Elsewhere is a Nebuchadnezzar-sized sculpture of a Dom Pérignon bottle by Marc Newson (who is now, by the way, also working with Apple). Atop the minibar is a padded container, holding – a bottle of bubbly. There is art and sculpture throughout this amazing luxury hotel. Its designer, Philippe Starck, famously put maps of Paris, at an angle, on rooms’ desks, all of which have real, bespoke and working guitars. Currently, to celebrate the Paris Bienniale, the hotel’s lobby is blooming with around 800 paper flowers, on individual stalks, by Soline d’Abouville. At his previous hotel in Rome, the GM here, Serge Ethuin, had Tiepolos and their like. Here he is surrounded by 21st century art.