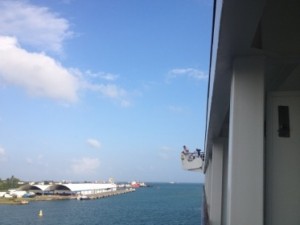 Officers on the bridge

The floating luxury hotel that is the 148-room – sorry, suite – Silver Cloud arrived at Colón, on Panama‘s northern, Caribbean, coast early in the morning. As always, the officers were up on the bridge as the eternally-young, 20 year old ship, the doyenne of the Silversea fleet, nosed her way to Colón’s cruise terminal. As always, the flag of the destination, in this case Panama’s red, blue, white and white quartered flag (with one red star, one blue star, in the white quarters) fluttered over the ship. The gal, as is her habit at sea, was power-walking the deck as the ship arrived. 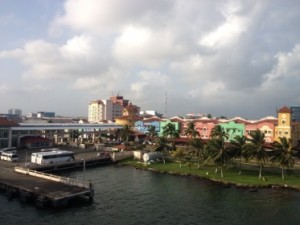 Looking down at Colon port

Colón takes its name from Christopher Columbus, and John McCain is arguably its most famous son – he was born in the US Navy hospital at the Coco Solo submarine base. Today, the city has a population of around 78,000, boosted by daily commuters coming in from Panama City to help operate the 600-acre Colon Free Trade Zone, the largest in the Americas. The busy Colón-Panama railroad, which is predominantly shifting containers, is interestingly run by Kansas South railway company: the Panama Canal, running more or less parallel to the railway, is overseen by Hong Kong’s Hutchinson Whampoa. 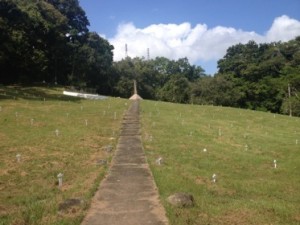 I heard the full story of the canal when sailing through it three years ago but if anything it was all the more poignant to see it this time, from the land. Our driver took a side road from Colón south to Panama City, and stopped at the French cemetery, a sloping garden with one granite plinth surrounded by hundreds of individually-numbered white crosses. This is a memorial to the nearly-20,000 workers who died, mostly from yellow fever, during the disastrous attempts by the Suez Canal engineer Fernando de Lesseps to build a canal here. There are also plaques, erected 2014, to commemorate the centenary of workers from Guadeloupe and Martinique who lost their lives (the best pertinent book I have read is David McCullough’s The Path Between the Seas, The Creation of the Panama Canal 1870-1914).

Even before we arrived at the luxury Panama City hotel that was our final destination today we saw yet more history. We went to the former Howard Air Force Base, closed November 1st, 1999, as a result of the Torrijos-Carter treaty after nearly six decades as the hub of airborne operations in the whole of Latin America. It was named for Major Charles Howard, 1892-1936. The site is now Panama Pacifico, with its own international airport, used as double for La Paz during the 2008 shooting of the James Bond movie Quantum of Solace. Since 2007 it has belonged to London & Regional (owners, inter alia, of Chewton Glen, Cliveden, Hilton London Park Lane and the Fairmonts in Barbados and Monaco). Here, L&R are putting up commercial centres and housing.