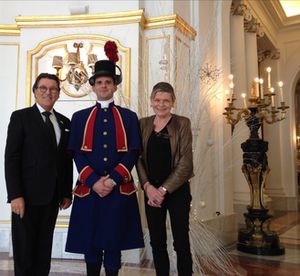 Luxury hotels that are unique can make a statement – immediately. Take the Negresco, in Nice. Where else, asks the gal, are you greeted by doormen and bellmen dressed in elaborate historical dress? There are, of course, other one-off fashion statements on arrival (think of the Downton Abbey-type plus-fours and tweeds at Rosewood London and the glorious moustachioed turban wearers at many of Taj’s top-tier palaces in India). But here in Nice to be greeted by such an imposing figure – sorry, make that plural as the GM, Pierre Bord, is invariably around too – is really special. 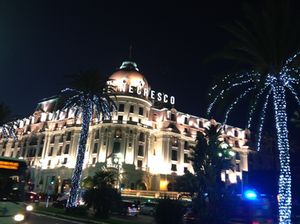 The Negresco, at night

Ah, the Negresco, named for Romanian Henri Negresco, 1868-1920, who asked architect Edouard Niermans to build him a little something in pride of place on Nice’s famous Promenade des Anglais. In World War I it was a hospital. In 1957 it was purchased by the Mesnages family, whose daughter, Mme Jeanne Augier, still lives in the top, sixth, floor – the building is actually owned by Fondation Jeanne Augier. The 120-room hotel is renowned for its Michelin-starred Chantecler cuisine, thanks to chef Jean-Denis Rieubland MOF, who uses masses of fresh produce from his father’s farm. 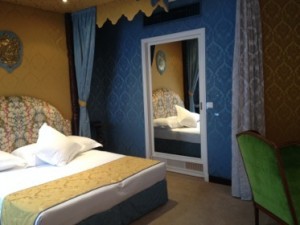 Rooms are marvellously decorated, by the hotel

A minimum crew of 165, added to in summer’s high season, look after this living museum of a hotel. The team includes designers and handymen par excellence. On my visit last week I saw them actually making the elaborate fabric-covered testers and half-testers for signature beds – they include fibre optic reading lights, and now, by the way, WiFi seems to be faultless throughout. This is a hotel that somehow manages to combine ancient and modern. Sit in the glorious two-floor-high bar on a Thursday night where a live DJ plays vinyls (bring yours along) and you can try Jean-Denis Rieubland’s bar snacks, which include incredible caviar-filled mini-macaroons. 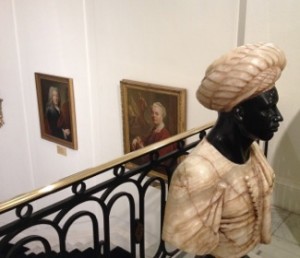 The main staircase has sculptures, paintings and more

But use the main staircase of this luxury hotel and you are in history, straightaway. You pass a wall plaque to Mme Augier’s late husband, Paul Augier, 1912-1995, and labelled portraits of kings and important figures of past days. There is a real, once used, copper hip bath, now filled with flowers, and a wooden rocking cradle. A bust of some African potentate’s other, and possibly better, half watches proceedings.