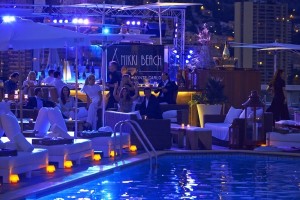 After such an exhilarating and thoroughly worthwhile few days at ILTM Cannes, it seemed like a good idea to head east to Monte-Carlo to see what is happening there. The gal is always amazed by the fact this Mediterranean jewel can turn itself into a Christmas Wonderland. It continually packs so much into such a small area, 0.78 of a square mile, in fact – the population is said to be just under 38,000 but goodness knows what is meant by that because, as with Geneva, anyone who can beetles across the border to France at the end of the working day. What Monte-Carlo has done is to build vertically. Fairmont Monte Carlo, for instance, is a flat-roofed seven-floor sculpture that is hidden under land on the seaside of the casino. It is impossible to work out the levels of any of Monte-Carlo‘s many luxury hotels, in fact. 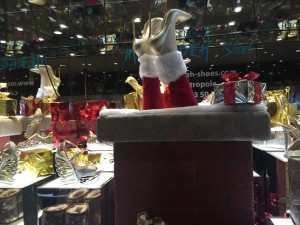 Christmas shoe display, in the lobby

They are always up to something new. This time last year Fairmont Monte Carlo had just brought in Nobu, a brilliant success that is just about to open for lunch as well as dinner (why IS it that Nobu Matsuhisa seems to be able to turn anything into a no-doubt-about-it success? In five weeks’ time Raffles Royal Monceau Paris‘ French restaurant becomes a Matsuhisa). Last summer, Fairmont Monte Carlo turned its rooftop pool area into a Nikki Beach, which of course brought in all the bright young things, of whom there are a lot in town. Legs are maximum length and beautifully turned, and you hear to be quite a lot of Russian, plus Azeri and Polish, being spoken by their owners. Legs and shoes are, indeed, such a feature of Monte Carlo that it is appropriate that one of the vitrines in the huge lobby, right by the casino entrance, has a Christmas shoe theme. 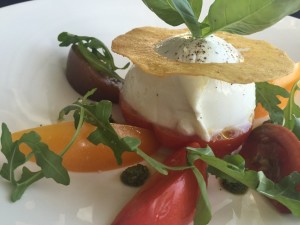 I was lunching with an Italian-born Monégasque, Claudia Batthyany (confusingly her name is Hungarian, think of that famous 19th century Prime Minister), who said when she was at school here 25 years ago, everyone had to learn Mandarin or Russian, your choice. Education is still superb, apparently. Apart from gastronomy – fancy having that as a subject! – lessons are taught, regardless of subject, in English or French. All kids are therefore bilingual, and hers also speak Italian, their language at home. In honour of that I started with a caprese, as interpreted by chef Philippe Joannès, an MOF who appears to have given the Saphir lobby lounge a big boost. You do feel as if you are on a massive ocean liner as that facet of the building is cantilevered out over the Mediterranean. Look through all-glass walls, past the terrace immediately outside, and you could be sailing the ocean blue. 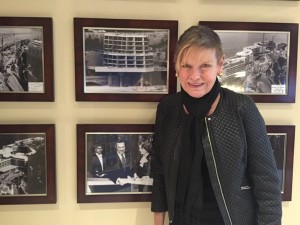 We talked about the history of the hotel. It was opened in 1975 by Princess Grace, as a Loews hotel. Those were still the days of Concorde and Preston Robert Tisch – father of  Jonathan Tisch, Chairman of Loews –  saw having a beautiful property in Monte Carlo as a stepping stone to Europe. The rich of New York’s Upper West Side and The Hamptons would Concorde over to Paris and then motor, or train or even fly sub-sonic, to Nice and on to Monte Carlo. But Concorde was grounded and the Tisch family sold this, and also Ch Napoule in Cannes. It was bought by a Lebanese, Toufic Aboukhater, and later passed to a consortium that included the Bank of Scotland and Prince al-Waleed‘s Kingdom Holdings. The Livingstone Brothers‘ London & Regional, the current owners, picked up the 616-room hotel for a comparative song. This is the luxury hotel to be in at the time of the Grand Prix, for instance: the main entrance is next to the Fairmont Bend, and the Billionaires’ Club is meeting place of motoring minds, if they are rich. But you simply do not come to Monte Carlo if you are not rich, of course.