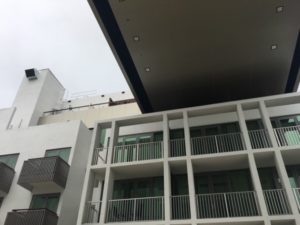 Looking up from underneath the pool

It is always a delight to be intellectually stimulated in, and by, a luxury hotel that has enough personality for several lifetimes, and Miami’s The Betsy, South Beach, fits that description. Not only has it been, since its opening in 2009, a unique house of creativity, with almost-weekly resident artists and writers staying inhouse, but now it has more than doubled in size and offerings. Look above, and to the left, at its new pool, cantilevered as an airbridge on ninth floor rooftop from the original Betsy, to its now-conjoined sibling, The Carlton. 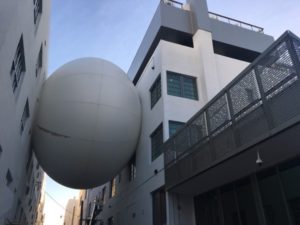 Yes, the incredibly clever owners, Jonathan Plutzik and his wife Lesley Goldwasser, have bought The Carlton, 1937 vintage, on Collins, exactly behind the 1942-vintage The Betsy, on Ocean Drive. They have joined the pair together with an airbridge which, as shown, looks from the exterior like a gigantic orb-shaped sculpture: to the right is a unique metal fretwork trellis commemorating, with their words, 13 Miami poets.  With the addition of The Carlton, The Betsy, which today is the name for both properties, has 130 rooms, and it now ups its tally of dedicated library-performance rooms from two, before, to at least six. 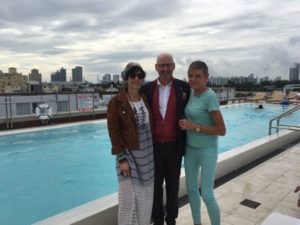 Lesley Goldwasser and Jonathan Plutzik show off the rooftop pool

There are extra performance spaces outdoors at ground level, where The Carlton’s old pool used to be. Inside is a stunning 400 sq ft studio that can host everything from art to yoga, a book-filled library and a room with tables for private dining or events with, outside its door, an ampitheatre-like set of graded seating for drinks or listening to poetry. They do a lot with poetry here; during the annual Miami Poetry Month, every April, some of the hotel’s team read poems from the main Ocean Drive terrace, to delight passers-by. 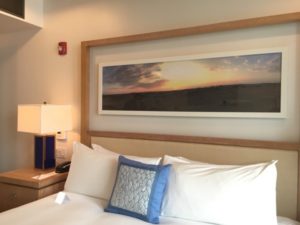 This is a happening place. January’s arts schedule, working with FIU Department of English, Miami Arts Marketing project, Miami Beach Urban Studios, the Adrienne Arsht Center and others, includes thought leaders Erik Gensler, Karen Brooks Hopkins and Robyn Perlman as well as a talented collective of composers, musicians, playwrights, poets and writers, plus advocate and influencer Tai Beauchamp. As well as all these once-off events, Laurent Tourondel, whose healthy-American restaurant in the main Betsy is always full, is adding, in the extended luxury hotel, an Italian, a craft beer corner, and a gelato kiosk. More happenings? Continual events, shared with the community, and if you still want cultural education, every bedroom has over-bed photos of Namibia taken by Jonathan Plutzik and Lesley Goldwasser. Every bedrooms also has several must-read books, always including at least one by Hyam Plutzik, the Pulitzer-nominated poet – his son Jonathan, yes, the polymath who manages to be top financier plus culture-vulture as well as hotelier, is thrilled to have found, and published, a lost work by his father, Letter from a Young Poet, with a foreword by Daniel Halpern. And Jonathan Plutzik, who believes that creativity takes courage is always looking for more ways to stimulate the guests’ minds. See him talking at the rooftop pool, below.