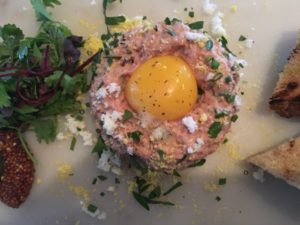 Steak tartare, on a long board

The gal had her share of eggs at Miami Beach’s literary hotel, The Betsy, straddling Ocean Drive and, now, Collins. If luxury is coming into an ambience with aspidistra-type greenery and comfy seating, and a sports bar to the right side and a really attractive brasserie to the left, and overhead fans and well-chosen music, and a sign announcing today’s poetry reading, here it is. And after flying in from Lima, it was more than time for dinner. Laurent Tourondel now handles all food for The Betsy direct – this includes a new Italian restaurant, Poeti, opening on Collins this November and according to The Betsy’s owner Jonathan Plutzik tastings of light-as-air pizza have been, well heaven. This night, however, it was the LT steak tartare, divine, light-with-egg-white, and the yolk on top. 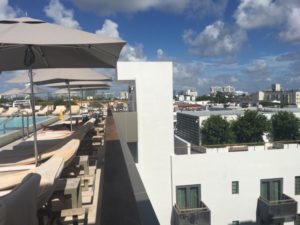 At breakfast, the avocado and pea toast on seven-grain, with feta, sprouts and lemon zest, could have smoked salmon added or, as here, a poached egg (have a Betsy set breakfast and it includes eggs and fruit, for $26, and you might be listening to I’ll Be Your Love as you drink La Colombe coffee and read the New York Times and Wall Street Journal that are placed a-plenty). As I knew from previous visits, The Betsy has food for the brain in overdrive. I was in 408, the Skyline Penthouse literally underneath the rooftop bridge pool – the one-room suite is named because it is approached via an L-shaped outside walkway, flanked by greenery, which reminds Jonathan Plutzik of New York’s Highline. I had a grand piano, and hard-cover reading that could best be described as eclectic. 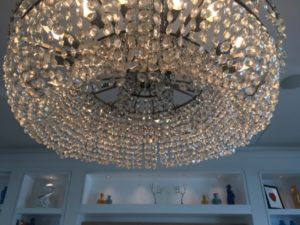 Chandelier, from Vienna via Harare

In alphabetical order I could have read Neil Baldwin’s Henry Ford and the Jews – The Mass Production of Hate, or Rory Carroll’s Comandante; Hugo Chávez’s Venezuela, or Michael J Fox, A Funny Thing Happened on the Way to the Future, or Bruce Turkel’s All About Them: Grow Your Business by Focusing on Others. I could also simply have lain on the bed and looked up at the giant chandelier. This, Jonathan Plutzik had told me last night, is an exact copy of one in Vienna’s opera house. The grandfather of his wife, Lesley Goldwasser, had taken this copy with him when he relocated from Vilnius to then-Salisbury, Rhodesia, in 1939, and it was retrieved by the Plutzik-Goldwasser pair, a couple of years ago. (They were on a trip to southern Africa which took in not only Zimbabwe but also Namibia, where they both fell in love with the amazing landscape; above all beds, including mine, are six-foot-wide blowups of sand dunes that they shot with their iPhone-7s). 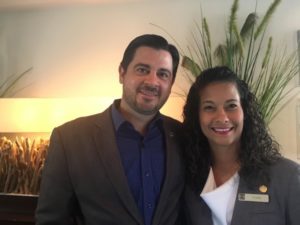 The Betsy, Miami Beach, is one of only two hotels among the ten companies, across all industries, being honoured by the nonprofit Americans for the Arts organization in New York on October 11th, 2017 – both GM Cory Randolph and a Puerto Rican colleague, Yusely Ramos (now supervising front desk, she started five years ago as a housekeeping attendant) explained how everyone is so proud of this: interaction with artists- and writers-in-residence, and the inclusion of different communities, is phenomenal, they said. The entire hotel, it seems, is one giant performance area. It does, in fact, now encompasse two former hotels. On Ocean Drive, what is now called the Colonial Wing is the original Betsy, once The Betsy Ross Hotel named in honour of the woman who sewed an American flag for George Washington, and whose name became a symbol of patriotism in WWII. An air-bridge through what is a giant egg, or orb, leads to the one-time Carlton on Collins Street, now called the Art Deco wing. My lovely room was on top of this. Head down various staircases and elevators to the Collins Street ground level and there are meeting rooms, yoga spaces, a second breakfast venue for bijou continental buffets (no avocado-pea-toasts here) and this is where Poeti will open. As I know from previous visits, there is always something happening at this one-off luxury hotel.