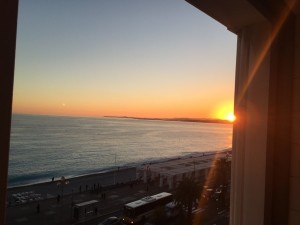 Sunset. Back on the French Riviera for the annual ILTM in Cannes but first, for the gal, a getting-to-know-you of a luxury hotel that has branded since the last visit. What is now Hyatt Regency Nice Palais de la Mediterranée Hotel & Casino has sensational sunsets. It also has a pretty sensational past – Catherine Deneuve played the Palais’ owner, former Balenciaga model Renée Le Roux, in a 2014 film, In The Name of My Daughter, about the 1977 disappearance of Le Roux’s daughter, Agnès (mama’s lawyer, Maurice Agnelet is, apparently, still in prison because he is alleged to have murdered her). It alleges that mafia were trying to get mama, who stood in the way of Nice‘s famous Promenade des Anglais casino being taken over by gangs. 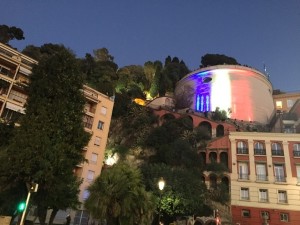 Looking up at Tour Bellanda

I checked in, and quickly went out again to take a Promenade hike before the sun disappeared completely. I headed to the left, past Le Méridien and to the old port. There was Tour Bellanda, marvellously illuminated in the tricolour colours. There were steps, I could see them, so of course I had to climb them, 358 steps up and 358 down. Lighting was just enough, so it was no problem. And then back home, to get ready for dinner. Now any hotel restaurant that can entice people to come in through the main lobby and up via an elevator is doing jolly well to get even a few tables filled but this chef, Cyril Cheype, who helped open Park Hyatt Palacio Duhau in Buenos Aires, certainly can cook. 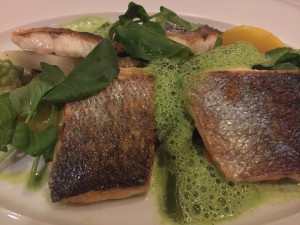 I had fresh Autumn vegetables on a pumpkin mousse, with olive oil and sweetbread jus, followed by seared seabass with pan-friend oyster mushrooms and watercress foam. The kitchen insisted on sending out a sampling of desserts, including half-bite sized cornets filled with something creamy. We drank a couple of glasses of Savigny 1er Cru Thibault de Planiol 2011 and then I went back up to room 505 and glanced at its books, which included an autobiography of a footballer, Niall Quinn, which certainly increased my knowledge of the beautiful game. The 188-room hotel, by the way, is J-shaped and it is definitely preferable to get a room, like mine, facing across the Promenade to the beach, and sea. 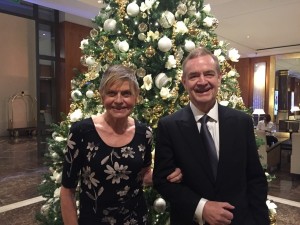 This luxury hotel already has its Christmas tree up, so while being photographed with the GM, he told me how he arrived just before it became Hyatt Regency, on April 1st, 2013. He likes projects, this Swiss gentleman. He had previously supervised the doubling in size of Hyatt Regency Bellevue, WA, having arrived there 2007, only to find the economy crashing a year later. He has already made this Nice hotel particularly friendly, thanks to marvellous staff, and, fortunately, I never came into contact with its casino.