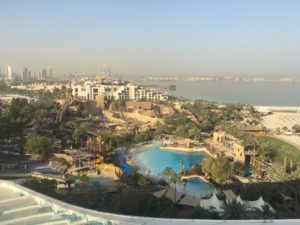 Look down at Wild Wadi

Yesterday the gal was staggered by height at a Jumeirah hotel. Today it is the architectural shape of another of the brand’s luxury hotels. Jumeirah Beach Hotel is often known as ‘The Wave’, for that is what it looks like, soaring to 26 floors at its peak. Replacing the former Chicago Hotel, it was designed by W.S. Atkins and it opened in 1997 with that now-legendary hotelier, Gerald Lawless, as GM. Favoured suites today are those at either end of the building. From your terrace, you look up and up, as shown above. From suite 1115, I was also able to look down, at the magnificent Wild Wadi water park that is a prime reason that many, especially families, choose to stay here – kids also adore the Sinbad’s Club, by the way. 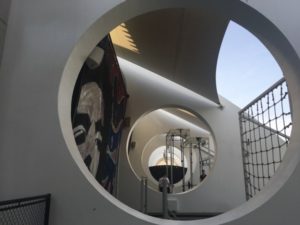 The gym is now outside, too

For me, one of the magnets is the splendid gym, a two-floor roundel that has now extended to give an alternative outdoor fitness area complete with machines, TRX ropes and a significant climbing wall. I also got exercise by walking over pre-dinner to Burj Al Arab, across the causeway from my temporary home. I coincided with a magnificent Jumeirah party to mark Arabian Travel Market ATM. Hosted by Jumeirah President/CEO Stefan Leser and his close disciples, it just showed what Jumeirah can do when it comes to events – it coincided, by the way, with another major function that the company was hosting, the official Arabian Hotel Investment Conference AHIC party at Madinat Jumeirah. The extended Jumeirah team can do anything, nothing beats them – last week they catered for a ladies’ wedding party in Abu Dhabi, 2,500 guests and 500 all-female servers (I am told the hardest task was carrying in the whole baby camel, one of the buffet’s delicacies). 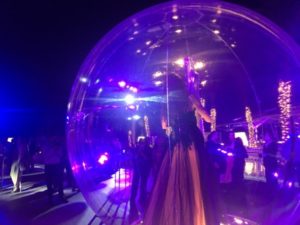 Part of the live music

This particular party was on the Burj Al Arab ‘terrace’, also known as the 100-by-130-metre floating extension, with pools and restaurants, that was fashioned in Finland, floated here and attached. The party was magnificent, starting with music from mostly-wandering musicians electronically controlled by a DJ onstage: the only static player was the harpist who, for reasons that are obvious when you see the image on the left, could not move. The splendid food and drinks stations did not, if I recall correctly, have whole baby camels but I did pass one bar area that was merely pouring the Burj Al Arab’s own-label red wine. Sadly I had to leave, and head back home for dinner with Jumeirah Beach Hotel GM Sven Wiedenhaupt and his wife Michelle, whom he had met when he was Md’ InterContinental New York Barclay Hotel. 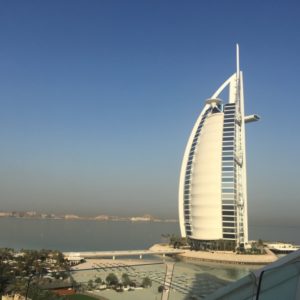 Dinner was at Jumeirah Beach Hotel’s glorious Argentinian restaurant, La Parrilla, on the 25th floor of ‘the Wave’. Belying the Dubai norm that is New is Nice and Old is Out, this place has been going for over 16 years and has masses of locally-based regulars (there was a big birthday table there that night), and Argentinian joie de vivre seems, partly thanks to the gregarious manager, to affect everyone. There was tango dancing, and an excellent 2013 Caro Malbec, from the Rothschild portfolio, and I heard about the pop-up that took over the restaurant for three days in 2014. That was led by one of the top chefs in the Gaston Acurio stable – when I read there thoughts of my lovely meal in Mandarin Oriental Miami a couple of weeks ago flooded back. Good food, with emphasis on that G word, is a small world. In the morning, I headed on, looking across at the Burj, of course now all cleaned up from last night.  NOW TOUR SUITE 1115, BELOW