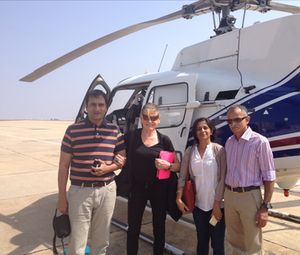 Ready to go – from left, Pramod Ranjan and Naina and Arun Achappa

Arriving at a luxury hotel in style is, well, stylish – and going with the owner of that property is a mile-high in style.  Last time the gal travelled from Bangalore (proper modern name Bengaluru) to Vivanta by Taj Madikeri, Coorg, it took six hours, in the back of a comfortable car that still managed to relay all the bumps and holes in the road beneath.  This trip, this time, took 70 minutes, once airborne.  The other passengers were Pramod Ranjan, and the resort’s naturalist-engineer, Arun Achappa and his wife Naina.  The Air Deccan pilot looked like a senior politician off-duty, in t-shirt and blue jeans. 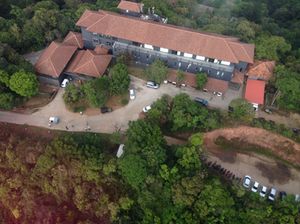 Flying in low on our way to the hotel

It was a fascinating journey. For at least 30 minutes we were over the flat roofs of tightly-packed buildings that were obviously still part of Bangalore (or were we going round and round, Tony Lumpkin-style from She Stoops To Conquer?). Finally, we moved on to rural areas, first endless fields of planted orchards, then paddy-fields as far as the eye could see. When we got to the Coorg area of Karnataka State, the landscape evolved to low wooded hills, with the occasional large hacienda-type compound. These were coffee farms, apparently. We rose on up to the 180-acre resort, and circled low over it, before landing on the neighbouring, non-hotel golf course.  Fortunately that day’s tournament had just finished. 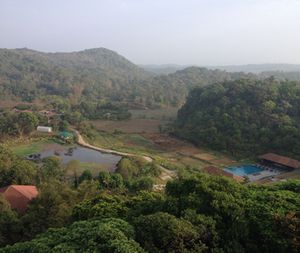 View down from the lobby and Ferntree restaurant

Like a friend whose friendship becomes more of an emotion with each meeting, to return to a hotel that says WOW even more sincerely than last time is something special.  Once again, I looked over the lodge’s wide, open-sided lobby, and across the decorative fan-shaped pool beyond, at the landscape six floors below. I had the same view later, at breakfast, sitting on Ferntree’s outside terrace: eat yoghurt and wholewheat croissants (let me heat them for you, in the roller-toaster), and drink the hotel’s own-grown flavourful coffee, and look down at the lowest part of the resort, down to the big outdoor pool. 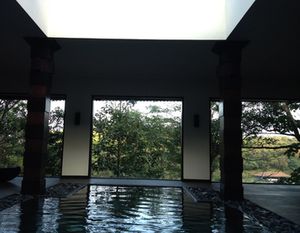 My own private pool

This time I had my own pool – even if by yourself, as I was this time, do choose one of the pool villas.  The pool is multifunctional.  By day, it is open to the sky. At sundown, close its glass roof (some of the Madikeri creepie-crawlies like swimming). The pool shares a room with the ‘office corner’, with its excellent WiFi connectivity. To one side is the big dining-living area, with a real-log fire. To the other side is the bedroom, with another real-log fire, and a bijou balcony for eating-à-deux, looking into lush undergrowth.  As last time, I made good use of the hotel’s Technogym, but no time for throwing pots in the art studio, alas. 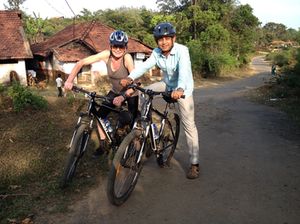 I also had another great cycle ride, as last time, with Krishan Kant Aggarwal, whom I call KK.  He is GM of this amazing resort, and he says he usually keeps fit merely by never taking one of its 35 electric buggies.  This is quite a feat.  It takes me 12 minutes hard-walking to get up from PV1 – Pool Villa 1 – to the lodge. The main concrete lane that links all the 63 villas is one long loop, like an elastic band that squiggles a bit and is set at an angle of what seems like 45 degrees.  From PV1 a buggy would go, if anti-clockwise, up and round to the lobby, further on round to the restaurant block, down to lowest level past the outside pool and activities centre, and wind back up again.  Come to think of it, some of our bike ride slopes were as steep as this. Apparently I was the first young female ever to make one of the slopes. 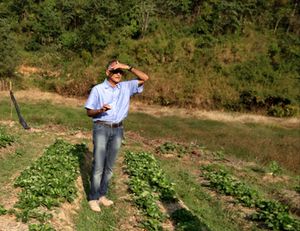 One morning started, this time, with sunrise yoga with Arun Achappa, on the lobby’s terrace next to the decorative pool.  Face north or east, he said – turn to the latter, here, and you get the most amazing light, orange-tinged baby clouds like coloured cottonwool balls on an azure background. Arun Achappa is indeed a man of many parts. He later showed me round his herb garden, and the nursery where he is raising 5,000 indigenous trees to plant in the forest that is part of this luxury hotel. He is also cultivating some of the tastiest strawberries I ever remember