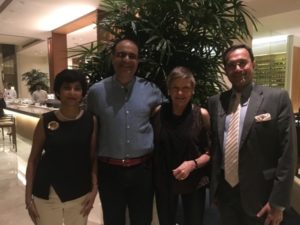 Arriving back at The Oberoi Gurgaon is always like coming home (especially since WiFi, and really fast, is now, as of November 1st, 2016, free throughout the complex). Doorman salute, and ladies in saris put their hands together in greeting – also, this luxury hotel does not go through the traditional bindi welcome ceremony, putting a red spot in the middle of your forehead which then has to be scrubbed off. The gal was also welcomed, on a Saturday evening, not only by GM David Mathews and his wife, Dr Sonia Mathews, who has just been awarded her PhD for a thesis on how Indian management can do an even better job: also calling by after a tourism meeting was Oberoi President, Kapil Chopra. 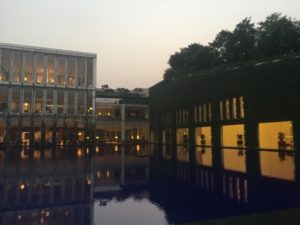 Look up at The Oberoi’s fifth floor lobby

Kapil Chopra had carefully overseen the building of the symbiotic pair of Gurgaon hotels, both owned by the Badal family, namely this 202-room super-luxury Oberoi and the 2004-vintage, 136-room Trident, right next door. The statuesque Oberoi, by architect RSP, opened 2011, by which time landscaping up the approach incline, to the right of the photo, was fully mature. From ground level, you look across a gigantic decorative lake, to the five-floor main building, with the all-glass lobby, reached via the incline, at the top. Down at ground level, a pair of two-floor glass buildings house Gucci, on the right, and, coming on the left in April 2017, Lexus’ new lifestyle salon. 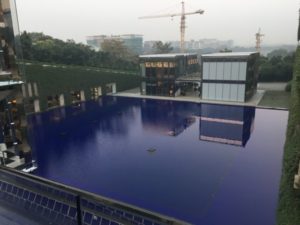 From the lobby, look down across the lake, to Gucci

Once up at the lobby you look down, over the lake to the two glasshouses. Now, on your left below the living wall, you have the shopping arcade. I hastened however to 6120, the Kohinoor Suite, complete with its own 60-ft cantilevered lap pool (there is also a gym, with a Technogym runner with Sudoku, but I preferred to go down to the ground floor gym, next to the spa, for its greater range of equipment). Then we met up in the Piano Bar, which used to have a dabbawalla bike sculpture by Valay Shende but it must be on loan somewhere, and after that it was dinner in Amaranta, named for a flower that never dies. 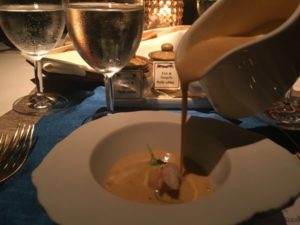 Last time here in this luxury hotel Amaranta was coastal cuisine but now, under chef Anirban Dasgupta, it is ‘modern Indian’, and its popularity has soared about 400% – book ahead, especially via India’s brilliant restaurant app EazyDiner. I tried a Pondicherry Pouillabaise (sic – apparently that is how they spell the French fish soup in that former French outpost). A creamy pink coconut soup was poured over seafood in the base of a hand-sculpted white bowl. There were superb black rice breads from Coorg, and individual cheesecake patties from Kerala, and more besides. And then, only a few hours later, it was breakfast in 361, a somewhat unique version of 360, the restaurant in the original Oberoi Delhi, which re-opens January 1st, 2018, after a complete-hotel Adam Tihany renovation – apparently, when it was open, 360 and 361 were two of the three top-grossing restaurants in Delhi. Certainly this morning it was packed at 6.45 a.m, but I was able to sit looking out at the adjacent decorative lake, and admire, yet again, the pristine look and service of everyone working here. See the photo at the top of this story. AND NOW TOUR SUITE 6120 BELOW