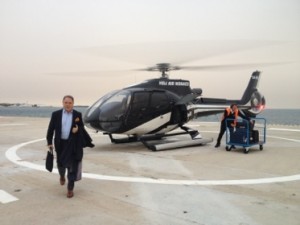 Belmond’s Filip Boyen does not want to miss a minute

Here we have it, back to Cannes, centre of the universe for so many reasons. Every year, beginning of December, it is where all the great and good – plus some wannabes and some definitely not so good – gather to celebrate the world’s best luxury hotels, and airlines and cruise lines and those who handle infrastructure, coming up with travel ideas and making itineraries actually happen. Yes, this is the once-a-year International Luxury Travel Market ILTM ‘mother ship’ of luxury events, and the gal, of course, was there. 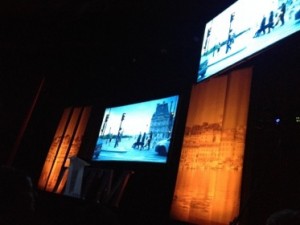 Leaders scurried in from wherever – Starwood‘s luxury boss Paul James had been speed-dating a panda in Chengdu, Belmond’s operations guru Filip Boyen rushed so fast off Heli Air Monaco Eurocopter EC130 B4  (arranged by Stéphane Filone’s travel company) that he nearly tripped over his Ferragamos. Everyone was keen to get to the Monday afternoon Forum, introduced by the ultra-smart head of ILTM, Alison Gilmore. This year, nearly 4,000 Forum listeners heard Nemad Pacek circle the world, geopolitically, in ten minutes. Justice Malala spoke passionately about Africa. Sydney-sider Lauren Caplin said work with, rather than hide from, the sharing economy, and New Yorker Edie Weiner, looking back from the future, said people from 35 to 75 are today one age. 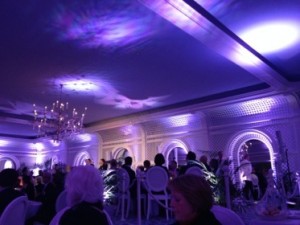 And then the privileged headed off, to cocktails here, dinners there – yes, there would be a massive amount of outstanding eatin’n’drinkin’ over the next four days. Some were invited to the ultra-exclusive dinner hosted at Oetker Collection‘s Hôtel du Cap-Eden-Roc, normally closed for winter but opened specially for the evening, co-hosted by Mike Batt, Travel Leaders Group; Greg O’Hara, Certares and American Express Global Business Travel,  and Nick Perry, UltraTravel. As always, Hôtel du Cap did it brilliantly, and one of the wines was Ch Clarisse, owned by Oetker’s Didier Le Calvez, based at Le Bristol, Paris. 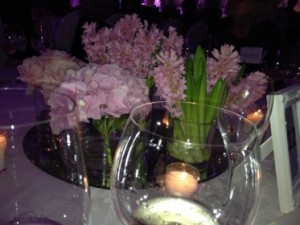 .. and flowers on the tables

It is quite a feat getting 140 invitees actually to turn up, which they did (Jennifer Fox came straight from hosting her own FRHI event, at Fairmont Monte-Carlo, with lunch cooked by Nobu – oh yes, this is THE gathering for those involved with luxury hotels). Regent CEO Mark Lettenbichler even managed to hobble here, via several aircraft, from Taipei, telling the incessant enquirers that the splint on his lower leg was as a result of brain surgery. It is also commendable, by the way, to manage seating at tables for ten so that everyone has suitable table partners, of the calibre, in my case, of the only senior editor in any sector other than, presumably, folk music who graduated from Harvard in that very subject. It is Nathan Lump, of Travel + Leisure, if you did not guess…