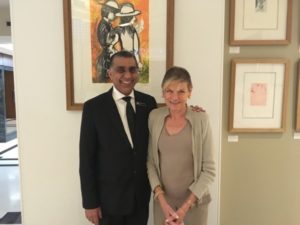 InterContinental Sydney is now 31 years old – it hardly seems possible that it was 1985 when the luxury hotel that the much-admired Hans Sternik, then President of InterContinental Hotels & Resorts, had signed atop the city’s 1849-vintage treasury building, opened as a 31-floor hotel. Concierge Zafer Raza has been here for 20 years (eight GMs, he tells the gal, with a laugh) and he has seen it evolve, magnificently. The top floor Executive Club is one of the best in the company’s global network: cleverly, at weekends it turns into a highly popular late-night supper club (Sydney’s annual LuxExperience travel show is using it September 21-24, 2016, as its official Supper Club venue). 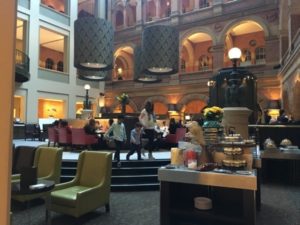 The hotel’s ground floor lobby, the Cortile, now has mammoth furniture, and it seems much more cosy and friendly than in years past. Leading off it, on Macquarie Street, is a Vera Wang wedding dress boutique. At the opposite side, off Philip Street, is a really exciting Bimbadgen tasting room: the winery was bought in 1996 by Mulpha, which also owns the hotel. Drop in to the glass-walled tasting room to try some of the different wines produced by winemaker Rauri Donkin, in the hills of Hunter Valley Wine Country. I have always thought that hotel lobbies are way under-used, particularly in comparison to airports, which seem to maximise earning potential for every square foot of space. 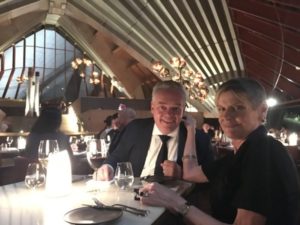 Interestingly, before the official government treasury was here, this very site was where the first vines in Australia were planted, way back in 1788. Now people stay here. Favourites of the 509 bedrooms look down to Sydney’s harbour and bridge, and to the Opera House, a hearty ten minutes’ walk. I headed down there with my good friend Jörg Böckeler, for dinner in the Opera House’s Bennelong restaurant (it was superb – I had chef Peter Gilmore’s slow-cooked pumpkin with Bruny Island C2 curd cheese and seeds, followed by Macleay Valley suckling pig, from the coast about 4.5 hours north of here, and a glass of 2014 Tim Smith Barossa Mataro Grenache Shiraz). 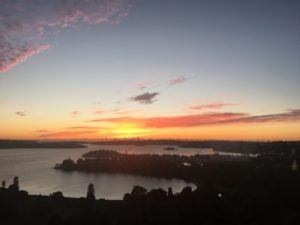 Back home, at this memorable luxury hotel, I woke up with the proverbial lark, and was awestruck at the sunrise. The Club lounge breakfast, from 6.30, was as good as the main offering downstairs, which is not often the case. I sat looking down at the view, drinking outstanding Vittoria coffee, and having a taste of Vegemite: for those who have never tasted this Aussie must-have, it tastes as it is, basically burned yeast (the dark brown breakfast spread was invented by the country’s leading food technologist, Dr Cyril Callister, in 1922 and today it is owned by that US giant, Mondelez). Fortunately there was time to spend another couple of hours writing, making the most of the creative ambience of 3000, the Australia Suite – see a video of it, below. Last time I was here I coincided with Angelina Jolie, filming in town. She had her six kids with her: hope she did not let them out on the balcony but there is certainly ample room for some of the children to run around inside. SEE THE VIDEO OF THE AUSTRALIA SUITE, BELOW