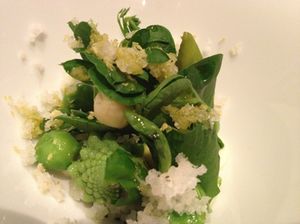 More celebrations at Hotel De L’Europe since the gal was last in Amsterdam.  On 25th November, 2013, Michelin announced that Bord’eau, the hotel’s 42-seat gourmet restaurant, had been awarded its second star. Wow what a difference it has made to business, says the gal. Fine-diners from far and wide reserve way ahead and once they have a table confirmed they will then plan a trip, staying overnight or longer in a top suite, and, if they are sensible, they will also book time in the hotel’s splendid new SKINS Spa. 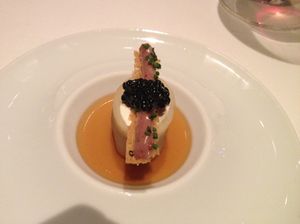 At lunch there is a €38 set menu, which is attractive to business diners who need to avoid ostentation – but then they add on here, add on there, and possibly end up with a post-prandial cigar in the fumoir so the bill per head is probably into three digits. Dine more slowly, and chef Richard van Oostenbrugge and his team of 34 cooks will put on a treat.  Even before you start, you are bought fougasse-type bread, a round of Guernsey butter, and Les Costes olive oil, from southern Spain. 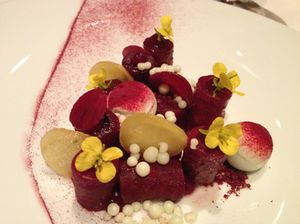 Then let the amuses begin, and you cannot stop them. They are so small you do not mind. You might start with a baby portion of rice couscous with crumbled Pierre Robert cheese, you might have a tiny eggcup-sized container which is infused, via pipette in front of you, with a spiced liquid.  You might have a one-bite lobster roll, and, to follow, what looks like a bone marrow section but is in fact rolled potato around minced veal, with caviar on top.  Sommelier Daphne Oudshoorn, wearing a stylish black ‘frock coat’ like all her female colleagues (all of whom get 10/10 for hair and facial grooming) delicately pours a glass of Ch Lafon Rochet 2006 St Estèphe. 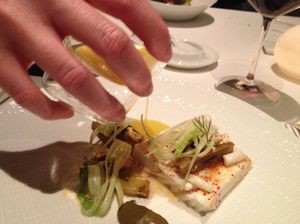 The jus is poured over steam turbot

My chosen dishes finally begin.  I start with beetroot baked in salt crust with tiny spiced wasabi ice-cream balls.  I go on to lightly-smoked steamed turbot with young fennel – what will lunch be tomorrow? The 12 top ladies in town, all heads of this and heads of that, are being invited for a get-to-know each other (and get-to-know this divine cooking, of course).  I hear later that they stayed far longer, and drank far more midday wine, than the several all-male groups that have similarly been hosted at Bord’eau.  They probably  also had a tour of the restaurant’s wine room, which has a thousand labels, 10,000 bottles in all. 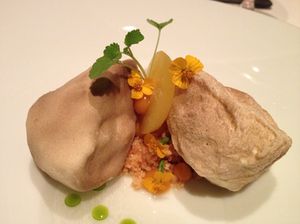 Of course there is a pre-dessert, a ball of Roquefort and chocolate. The dessert-proper is called Stones, Rock & Roll.  Well, it does look like two baby rocks, of sheep yoghurt, one icecream, one frozen sorbet, with, sandwiched between, buckthorn berry, and more fennel, and citrus.  It is now well after 10.30 p.m. and another party of four comes in, casually dressed but somehow empathising with the servers in their formal, though modern-twist attire. 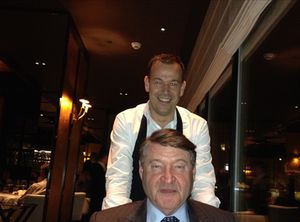 Tom Krooswijk, big-boss of this amazing Leading luxury hotel, says with a big grin that he has never had so much fun in his life – well, he has had some hardship posts, in places like Libreville, for instance.  He and Richard van Oostenbrugge are like teenagers plotting even more enhancements for Bord’eau. As I leave they are planning a trip to Tokyo to tour the Tsukiji fish market before it is relocated for development.